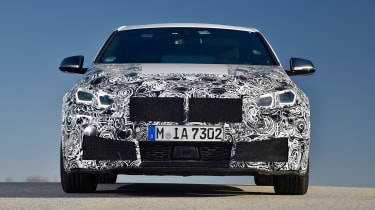 The hot hatchback is alive and well and, as we speak, the BMW 1 Series is being tuned up to take on the Mercedes-AMG A35 and popular Volkswagen Golf R. Badged M135i xDrive, the car takes the fastest 1 Series in a new direction, thanks to four-wheel drive instead of the manufacturer's traditional rear-wheel drive setup. We’ve already driven a prototype.

It’s likely BMW felt compelled to make the switch in order to modernise the 1 Series, and if its anticipated 4.7-second 0-62mph time is possible, it'll match the speed of the A35. The M135i feels like an impressive technical showcase too, sending as much as 50% of its power to the rear wheels. Its 2.0-litre petrol is derived from the engine fitted in the BMW X3 M35i performance SUV, and produces 302bhp and 450Nm of torque.

The prototype's engine has a broad surge of power, pulling strongly from low down and building its performance even at higher revs, unlike some turbo engines that tail off, requiring an early gear change. It's just a shame the car doesn't sound particularly good, something which will disappoint fans of BMW's famous six-cylinder performance engines. BMW has attempted to improve this with a contrived sound under acceleration, while the sports exhaust makes a rorty noise accompanied by pops and bangs when you lift off the throttle. 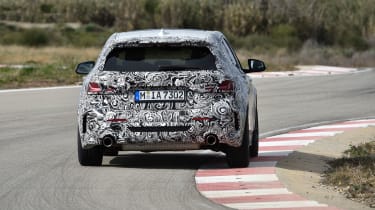 Pops usually occur when changing gear using the eight-speed automatic that shifts quickly and smoothly under acceleration and braking, even if it's not as snappy as the latest dual-clutch automatic gearboxes.

At speed, the M135i xDrive feels unflappable, making it possible for a driver unfamiliar with it to hop in and drive quickly from the off. Even when pushing hard on track, its handling remains friendly, even if this security also robs the hottest 1 Series of some excitement. Instead of sliding balletically like its rear-wheel drive predecessor, the prototype is more prone to understeer instead. Its sheer grip and four-wheel drive traction should, however, make it very quick along a slippery British B-road regardless.

As with standard versions of the 1 Series, the steering of the M135i isn't brimming with feel, but body bracing has increased the car's overall stiffness to make its responses even more precise. We'll have to get the M135i xDrive away from the test track and out on the road to judge ride comfort on its standard 18-inch alloy wheels, and to see how fun this new hot hatch is in the real world.

If you want to find out more about the cars the BMW M135i xDrive will have to beat, take a look at our Volkswagen Golf R and Mercedes AMG 35 reviews, along with our guide to the best hot hatchbacks. 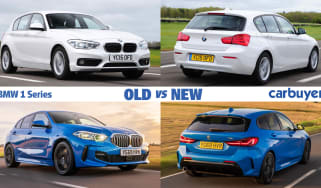 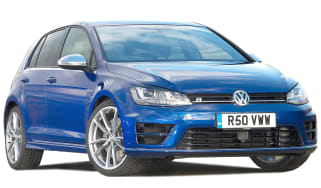