The Mercedes EQS concept is capable of over 400 miles on a charge and 0-62mph in 4.5 seconds 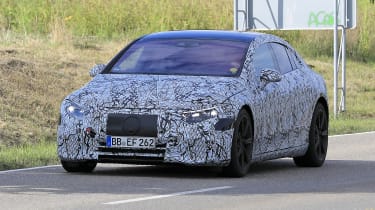 The Mercedes EQS has been spotted testing before it goes on sale next year. These new spy shots suggest the production car will bear some resemblance to the EQS concept shown at 2019’s Frankfurt Motor Show. It’ll be a luxury saloon similar to the Mercedes S-Class but will be electric-only, managing over 400 miles on a charge.

While the car may be revealed before the end of the year, we won’t see it in showrooms until the second half of 2021. The car will be a competitor to the likes of the Porsche Taycan and Tesla Model S - and prices will reflect that - while rivals such as the Audi e-tron GT, electric BMW 7 Series and next-generation Jaguar XJ will also be launched after the EQS.

The coupe shape of the EQS is even sleeker than the Mercedes CLS. It looks like the car will have angled headlights and a blank grille, set on a very low front end. The long sloping roofline flows into a short rear end, with slim LED tail-lights and a smooth bumper. It’s thought the headlights will offer several different light configurations, while some of the concept’s touches - like the door handles that pop out - will make production. This development model uses traditional door mirrors instead of cameras, but cameras may be offered as an option. 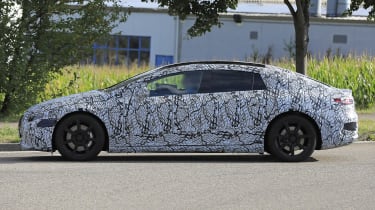 The concept’s interior was bathed in blue to highlight its electric powertrain, and gives us a clue about how future Mercedes interiors will look. The dashboard will sweep around and marry up with the front door trims, a feature inspired by luxury yachts. Most of the materials used are sustainable, with microfibre upholstery made from recycled plastic bottles and the roof liner made with some recycled plastic recovered from the ocean.

The interior is also said to feature the next-generation of Mercedes’ MBUX infotainment system, which doesn’t rely on a screen to relay information. Instead, it displays a lot of data straight onto interior surfaces. Other concept touches include hidden air vents and a fragrance holder.

The EQS concept comes with Level 3 autonomous driving capability for longer motorway trips and has the potential to be fully self-driving - so the windscreen could in theory be used as a giant screen.

With the power on offer, the car should be entertaining to drive. The EQS concept uses a large 100kWh battery and gets from 0-62mph in under 4.5 seconds. Four-wheel drive is standard, and the car is made from a relatively lightweight mix of aluminium, steel and carbon fibre. Mercedes says the platform and battery are scalable and can be used in a number of other models, so we expect to see this powertrain in more of the brand’s EQ electric models.

Currently, only a few electric cars can travel 300 miles or more on a single charge, but it’s claimed that the Mercedes EQS will be good for over 400 miles. It’s compatible with charging at up to 350kW, which would replenish the battery up to 80% in around 20 minutes. Few chargers currently offer this power, but we expect them to be rolled out in more places in the future. 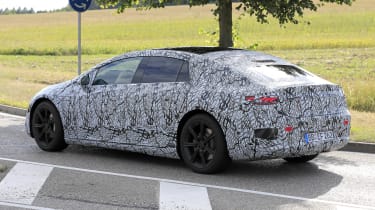 The EQS is likely to be offered with the same 7.4kW wallbox charger as the Mercedes EQC SUV, which would recharge the battery in 8-12 hours.

Read our review of the Tesla Model S to see how an electric saloon already available compares. 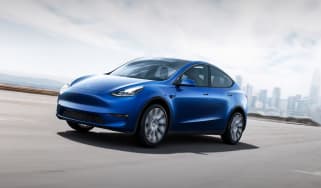