The Kia Ceed GT-Line range undercuts its rivals with sporty looks, a wide array of standard equipment and an excellent warranty 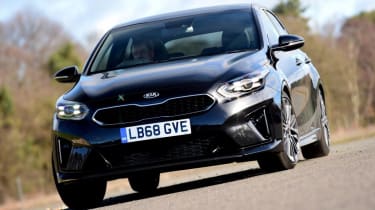 If there is any car that can finally banish thoughts that Kia is still a budget brand, it’s the Ceed GT-Line. Good looking, technologically advanced and well built, it stands up well to scrutiny against any European or Japanese offering. In fact, the only throwback to the cheap-and-cheerful days is a seven-year warranty, which Kia introduced almost a decade ago to reassure buyers who were worried about quality.

With the uplift in build quality, the price of the Ceed has risen out of the budget sector too, and the GT-Line trim level starting at just under £22,000 – which gets you a 1.0-litre petrol engine. Step up to GT-Line S, which can only be specced with a 1.4-litre petrol engine and a seven-speed dual-clutch automatic gearbox, and the price rises to around £27,500. While both the entry-level GT-Line and the range-topping GT-Line S are marginally cheaper than a similarly specced Vauxhall Astra or Ford Focus, but are they worth it?

The GT-Line is one of the sportier trim levels, mimicking the top-of-the-range GT hot hatch. As such it has 17-inch alloy wheels, darkened privacy glass for the rear windows, a deeper rear bumper with dual exhaust pipes. The GT-Line S gets larger 18-inch alloy wheels as standard, with the addition of LED headlights. In both variants, the result is a handsome five-door hatchback that looks far more appealing than lesser versions of the Ceed. 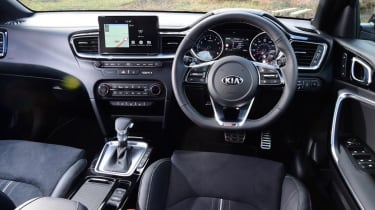 But it’s on the inside where Kia has really gone to town with the GT-Line. In the front are a pair of sports seats trimmed in cloth and fake leather on the GT-Line, with GT-Line S getting a half suede effect. They look great, are lovely to the touch and are comfy on longer drives. The driver’s seat is electrically adjustable on the S too, while both the front seats and even the steering wheel are heated for those chilly mornings.

Other smart touches include aluminium pedals and a flat-bottomed steering wheel; the latter is covered with buttons to control the functions in the infotainment set-up. This consists of an eight-inch touchscreen which controls the sat-nav and relays images from the reversing camera. The graphics on some rivals’ systems are sharper, but the Kia’s is very clearly laid out and among the easiest to use. As with all Ceed models, Android Auto and Apple CarPlay are standard on both GT-Line and GT-Line S trim levels.

GT-Line S models also cater to the audiophile thanks to an eight-speaker JBL sound system, which is relatively clear and punchy. You can connect your own music from a smartphone via USB or Bluetooth, while a large wireless charging pad can keep your device topped up when on the move.

The S model also adds more safety tech. Rear cross-traffic alert, lane-keep assist and a blind spot warning on top of the GT-Line’s standard city emergency braking and speed limit info display are all included. There’s also a park-assist function on the S that can automatically manoeuvre the Ceed into a perpendicular bay or parallel space; the GT-Line has to make do with parking sensors alone. 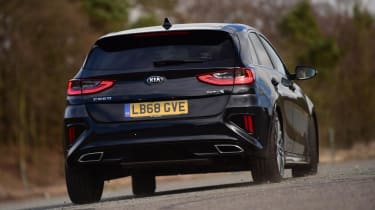 But what about the way the Ceed drives? Despite the sporty looks, the GT-Line is fairly easy-going rather than racy. The 1.0-litre engine isn’t as puny as it sounds, with a reasonable 118bhp thanks to a turbo. Pay an extra £800 and you’ll get a more powerful 138bhp 1.4-litre turbo petrol engine, giving a more-than-adequate 8.9-second 0-60mph time. There’s also a frugal 1.6 CRDi diesel with 114bhp available, which has an official combined consumption figure of just over 70mpg.

All the GT-Line engines are mated to a six-speed manual gearbox, but the 1.4-litre petrol is also available with an optional seven-speed dual-clutch automatic gearbox priced at £1,100. In the GT-LIne S model, this automatic gearbox is fitted as standard. In either variant though, we can’t recommend it as the gear changes are off the pace, which with the unresponsive throttle can make progress slow and jerky.

Even the manual gearbox found in the GT-Line models, the throttle is an issue - the shift quality is okay, but the revs hang on well after the clutch pedal is pressed. Combined with a vague biting point, making it difficult to drive smoothly, too. You soon learn to adapt your driving style in the manual to compensate, but with the automatic gearbox this is frustratingly difficult to achieve.

This is a shame because aside from the gearboxes, the rest of the Ceed experience compares strongly with its rivals. It looks smart, is packed with equipment, and the interior is superb. Its ride and handling don’t quite top the class, but it’s well above the average.

The warranty, looks, marginally lower price and equipment levels might well be enough to swing buyers in favour of the Ceed GT-Line range. It might not be a budget car any more but it still offers good value.

Do you want to know more about the Kia Ceed model range? Why not read our full drive review of the Ceed hatchback and the Ceed Sportwagon estate.