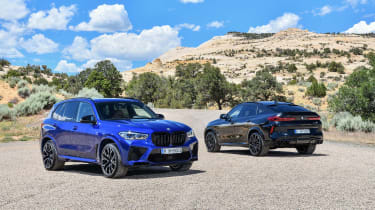 The latest-generation BMW X5 M Competition and X6 M Competition models have been revealed. Just like the BMW M5, the UK is only getting the most powerful Competition versions, each with a huge 616bhp. Both the X5 M and X6 M are available to order now, with the former starting at £110,610 and the X6 M costing £2,700 more at £113,310.

Providing all that power is a twin-turbocharged 4.4-litre V8 petrol engine, connected to an eight-speed M Steptronic automatic gearbox, an M xDrive all-wheel-drive system and an active differential.

Both the cooling and oil systems have been redesigned over the standard X5 and X6, and each gets a sports exhaust. There are model-specific chassis upgrades, alongside M Sport adaptive suspension and active roll stabilisation. BMW says the feel from the massive compound brakes can be individually configured. 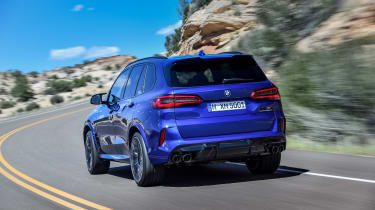 The new models come with almost 50bhp more than their predecessors and, despite each car being very heavy, the acceleration figures are almost unbelievable. Whichever one you choose, the 0-62mph sprint is dispatched in under four seconds; 3.9 for the X5 M and 3.8 seconds for the X6 M. That’s around half a second quicker than the previous models.

As you might expect, the X5 M Competition and X6 M Competition models feature styling alterations to make them look much more aggressive than the standard cars on which they’re based. At the front, both get huge new air vents and a blacked-out grille with twin grille bars, while each car’s rear end includes a larger spoiler and a redesigned bumper, complete with a subtle diffuser and four exhaust tips. The alloy wheels measure 20 inches at the front and 21 inches at the back, and a special BMW Individual paint colour is offered on the X5 and X6 for the first time.

Inside, there are a scattering of M badges to match the exterior. You’ll find them on the leather multifunction sports seats, on the door kickplates, on the lower centre console, and even on the standard head-up display. Two red steering wheel buttons act as shortcuts to different driving settings, and you can change the engine and throttle response, steering and suspension to suit your preferences. Three driving modes are offered: Road, Sport and a Competition-specific Track mode.

Read our BMW X5 and BMW X6 reviews, or check out our list of best large SUVs.