Built to celebrate the firm’s 70th anniversary, the Abarth 695 gets an array of performance upgrades including an adjustable rear wing 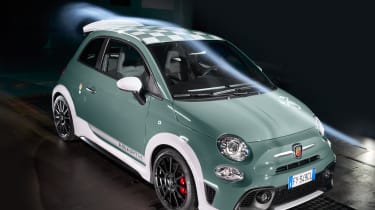 The Abarth 695 70th Anniversario special edition has been revealed. Built to celebrate the firm’s 70th anniversary, the special version of Abarth’s range-topping model will be limited to 1,949 cars, all featuring several unique upgrades. It will go on sale before the end of the year priced from £29,695.

Featuring tweaked styling over the standard Abarth 595, this special edition model boasts widened wheel arches and 17-inch SuperSport alloy wheels. The bodywork is painted in unique ‘Monza Green’ as a tribute to the original Abarth 500 that set six international records at the famous Monza circuit in Italy in 1958.

Fastest hot hatches you can buy

Other additions to the exterior include deeper side skirts, a chequered flag roof and a scorpion decal on the bonnet. The most significant change is a manually adjustable rear wing that offers twelve adjustment settings from zero to 60 degrees. Abarth claims that this new wing gives the car up to 42kg of additional downforce in its maximum setting, helping to keep the rear of the car stable at high speeds. 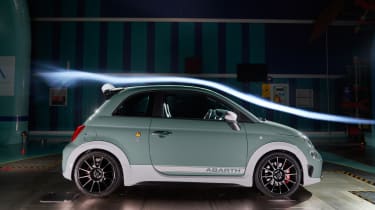 Power comes from the same 178bhp version of the familiar turbocharged 1.4-litre petrol engine as found in the 595 Competizione model. This sends power to the front wheels via a five-speed manual gearbox and a mechanical limited-slip differential. The claimed 0-62mph time is 6.7 seconds and the car’s top speed is 139mph.

Inside, a sports steering wheel and aluminium gear shifter have been added, along with a unique set of floor mats. Special Sabelt sports bucket seats are also fitted, and were specifically developed for the 695 70th Anniversairo. A seven-inch infotainment screen with Apple CarPlay and Android Auto is also standard alongside automatic climate control.

Do you want to know more about the Abarth model range? Read our review of the 595 hatchback or why not check out our pick of the best driver’s cars you can buy.