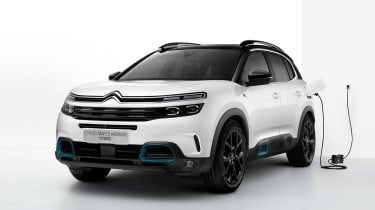 The car is powered by a 1.6-litre four-cylinder petrol engine producing 178bhp, a 13.2kWh battery pack and an electric motor mounted to the gearbox. This powertrain produces a total power output of 222bhp, which goes to the front wheels via an eight-speed automatic gearbox.

Citroen claims this setup is capable of 168mpg, although drivers are likely to see a lower figure in real-world driving. CO2 emissions are rated at 32-33g/km depending on specification, with a claimed pure-electric range of 34 miles. 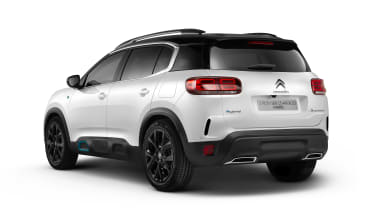 Performance figures have yet to be confirmed, but the C5 Aircross PHEV can be driven using only electric power at speeds of up to 84mph. The battery can be fully charged using a 7kW wallbox in two hours, with a charger plugged into a domestic socket taking six hours. The battery can also be topped up on the move via regenerative braking.

The C5 Aircross PHEV receives several mechanical enhancements over the standard model, with the addition of a new multi-link rear axle and the firm’s Progressive Hydraulic Cushion suspension. Citroen claims the latter is capable of smoothing over road imperfections to improve the car’s ride quality.

Inside, Citroen’s ‘Advanced Comfort’ seats are standard on all models, along with the fully adjustable sliding rear seating bench found in the conventionally powered C5 Aircross, which allows for individual seats to be folded down. The addition of the battery pack reduces the available boot space from 780 litres to 600 litres. 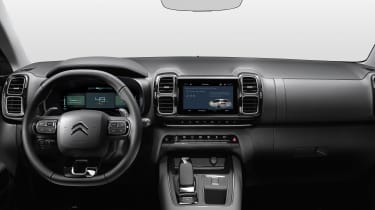 Two trim levels are available, with both ‘Flair’ and ‘Flair Plus’ models getting ‘Anodised Blue’ exterior trim, a frameless rear-view mirror and a new digital readout for the 12.3-inch digital dial cluster and an eight-inch infotainment screen. Android Auto and Apple Carplay are included as standard, and buyers will receive a three-year subscription to Citroen’s real-time traffic update system.

Also featured is a new drive mode selector mounted on the centre console, with three drive settings called ‘100% electric’, ‘Hybrid’ and ‘Sport’. To comply with new road regulations, the C5 Aircross PHEV emits a specific sound at speeds below 19mph to warn other road users when it is in fully electric mode.

Citroen has also confirmed that the car will also feature remote functions. Called ‘e-Remote Control,’ these functions are operated via the MyCitroen smartphone app and allow you to schedule when the car will start charging. It’ll also offer the ability to set the climate control remotely.

Want to know more about the Citroen C5 Aircross model range? Read our in-depth review for everything you need to know. 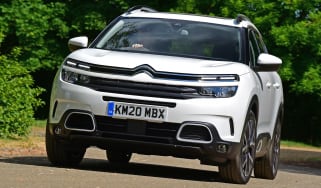 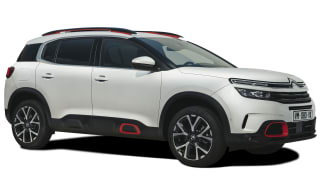