The high-performance Audi RS Q3 SUV will be launched at the Geneva Motor Show. 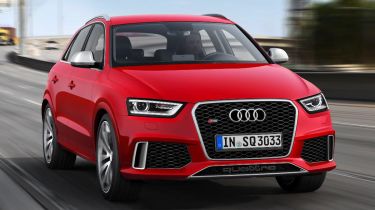 Featuring a 306bhp 2.5-litre five-cylinder turbocharged engine, the Audi RS Q3 can sprint from 0-62mph in 5.5 seconds and hit an electronically limited top speed of 155mph.

The RS Q3’s engine is the same that featured in the recently discontinued Audi RS3, albeit tuned down to 306bhp rather than 335bhp. The engine now features stop-start as standard, which helps it to return a claimed average fuel economy of 32.1mpg and emit 206g/km of CO2.

The RS Q3 rides 25mm lower than the standard Q3 SUV. 19-inch alloy wheels are fitted as standard, but 20-inch wheels can be ordered as an optional extra. The car also features uprated brakes.

To differentiate the high-performance SUV from the rest of the range, Audi has added a sporty bodykit to the Q3, with larger bumpers that extend the car’s overall length by 25mm over the standard model, taking total length to 4,410mm. The RS Q3 weighs 1,730kg.

The Audi RS Q3 will become the eighth RS model in Audi’s line-up, and is the fourth to be launched in the UK market this year, following the RS6 Avant, RS5 Cabriolet and RS7. The RS Q3 will debut at the Geneva Motor Show with first deliveries taking place in late 2013.