Skoda Superb gets a facelift

The Skoda Superb has had a full facelift ahead of the Shanghai Motor Show. 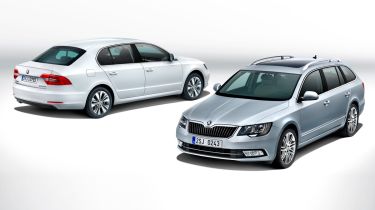 The Skoda Superb has received a comprehensive facelift ahead of the Shanghai Motor Show later this month. Both the hatchback and estate versions of the car are set to be unveiled on 19 April, with the Czech-based, Volkswagen group company promising extensive modifications to both the front and rear.

These changes include a Rapid and an Octavia-inspired wider grille and redesigned headlights, as well as squarer fog lights and a single chrome bar running across the lower air intake. There’s a new sculpted bonnet along with redesigned front wings, too.

At the rear, both models get a set of updated light clusters, while the numberplate has been repositioned from the bumper to the middle of the boot lid. Completing the changes are two additional metallic paint finishes – Meteor Grey and Moon White – and a set of new alloy wheel designs.

Skoda has sought to match the exterior changes by updating the Superb’s interior options, too. New fabrics and patterns for the seat covers, as well as updates to existing design combinations, are now available.

Despite the alterations, both the hatchback and estate lead the class in terms of boot and rear seat legroom, while the ability to move the front passenger seat from the behind also brings added comfort.

Prices for both versions are yet to be confirmed, but expect a small increase over the existing car's £18,030 starting price. The car will be launched towards the end of June.