"The Skoda Superb hatchback has more space, comfort and capability than just about any car for the price"

The Skoda Superb embodies everything we’ve come to expect from Skoda over the past decade or so. It’s a great-value, highly practical and comfortable family car that has many admirable qualities. For even more practicality there's the Skoda Superb Estate which we've reviewed separately.

Alternatives to the Skoda include other large family cars such as the Peugeot 508 and Mazda6. While these models are less popular than they once were, they bring the space and refinement of executive cars like the BMW 5 Series at a much lower price. The Superb is so good that it even challenges these executive cars in some areas, despite costing less. 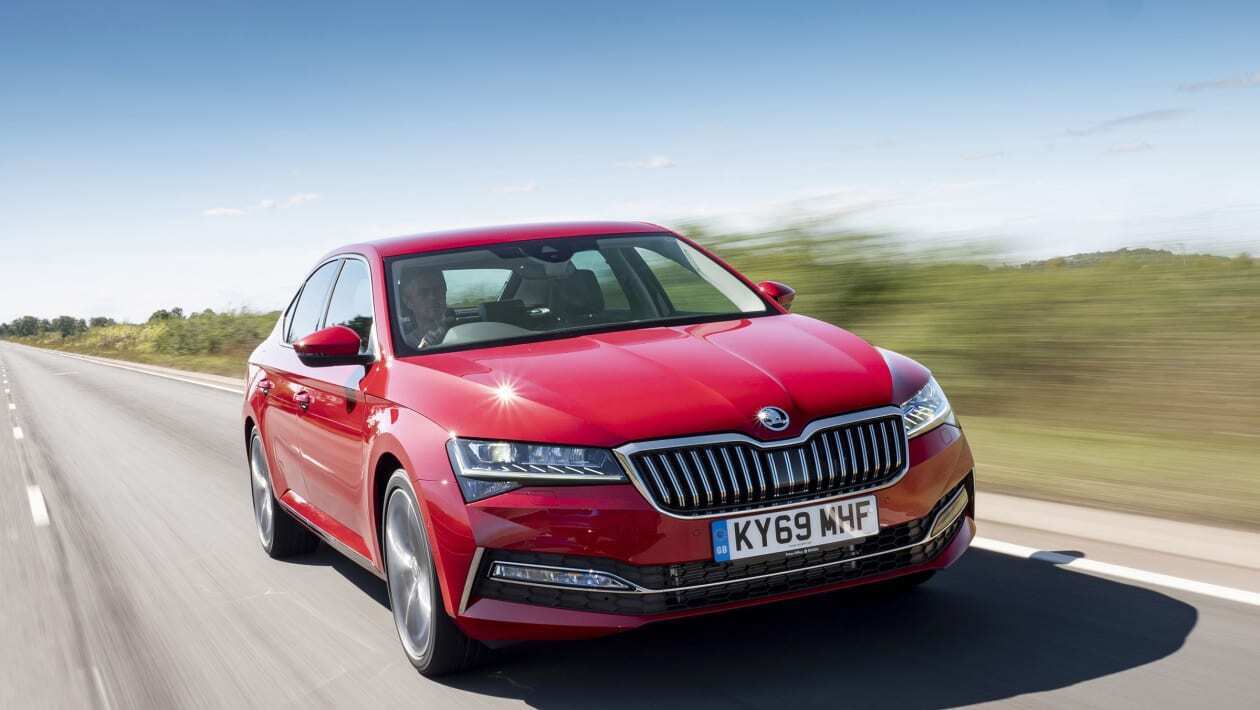 Although the Superb was updated in 2019 with a different grille, LED headlights and new Skoda lettering on the boot, it wasn’t a huge change overall. Skoda also launched the Superb iV plug-in hybrid model at the same time, offering low company-car tax costs and the potential for ultra-low running costs for some buyers.

The Superb has always lived up to its nameplate for all sorts of reasons. For a start, it’s really comfortable. While it’s not particularly exciting to drive, the Skoda is smooth, settled and composed even on bumpy roads, plus it has a good range of engines to choose from.

The entry-level 1.5-litre TSI petrol with 148bhp is a great choice, as it’s both smooth and punchy but also really quiet and reasonably efficient. It goes from 0-62mph in around nine seconds and has an official fuel efficiency figure of 47mpg if you go for the manual transmission.

Both this TSI petrol and the 2.0-litre TDI diesel engines are available with a manual gearbox, or they can be specced with the DSG automatic gearbox which is the only option on all the other engines. It’s also possible to specify the 197bhp diesel and the 268bhp petrol engines with four-wheel drive for extra traction on slippery surfaces. The latter engine is related to the motor in the Volkswagen Golf R and SEAT Leon Cupra, so it brings impressive performance but poor fuel economy.

Thanks to its ultra-low tax costs, the Superb iV plug-in hybrid is far more likely to strike a chord with business buyers. It uses a 1.4-litre petrol engine, electric motor and battery pack to deliver an electric range of up to 34 miles, covering off most daily trips. It’s claimed to return nearly 200mpg but this depends entirely on how often you’re able to charge up the batteries and use electric power rather than the engine.

Trim levels include SE, SE Technology, SE L, SportLine Plus and the top-spec Laurin & Klement. Even the SE model has the basics covered, with air-conditioning, Bluetooth and DAB radio with an eight-inch touchscreen. Climb the range up to Laurin & Klement (whose name pays tribute to Skoda’s founders) and features like 18-inch alloy wheels, full and adaptive matrix LED headlights, a Canton 10-speaker stereo, keyless entry, heated windscreen and heated seats boost comfort, while the 9.2-inch touchscreen navigation system on top models is very impressive.

A recent update has also introduced ‘care connect’ on all models, which automatically contacts the emergency services if the safety restraint system is activated. Depending on spec, there’s also a Skoda Connect app that allows you to access and activate the lights and horn of your Superb from your smartphone.

We tend to expect larger cars to be safe and the Superb doesn’t disappoint, with a full five-star score after Euro NCAP crash tests conducted in 2015. There are seven airbags fitted as standard, while options include Crew Protection Assist (£475), which closes the windows and sunroof and tightens seatbelts if a crash is deemed imminent. Driving aids like lane-keeping assistance and blind-spot monitoring are also offered.

The last time the Skoda Superb featured in our Driver Power list of the top 75 cars on sale was in 2020, when it came in 10th place. Although it didn’t feature in our top 75 cars ranked in in the 2022 Driver Power survey, the Skoda Kodiaq SUV earned a fifth place finish, with its smaller Skoda Karoq sibling coming in at 18th place. Both share engines and parts with the Superb, giving a strong indication that it will be reliable. Skoda as a brand, however, finished a disappointing 20th place out of 30 manufacturers.

Choose one of our top ten most economical family cars and you'll save money while being able to carry passengers and their luggage.
Top 10 best used estate cars 2022
Best cars

Whether you’re already a dog owner or are looking for a vehicle before a puppy arrives, we have taken the stress out of searching by shortlisting the …
Top 10 best hybrid family cars 2022
Hybrid cars

Cycling is a popular hobby but you'll probably need a suitable vehicle for transporting your equipment. Here are 10 of the best cars for cyclists and …
Top 10 most comfortable cars 2022
Best cars

Fast driving can be fun, but what if you just want to chill behind the wheel? We show you 10 cars designed to relax more than to entertain.
Top 10 best motorway cars 2022
Best cars

Need a car that can tackle serious motorway miles with ease? Look no further than our list of the best cars for the job.
Top 3 used cars for dog owners for £17,000
Land Rover Discovery Sport SUV

“Dear Carbuyer, I need a car that is spacious and practical enough for my dogs. What do you recommend for £17,000”
2019 Skoda Superb: prices, specs and release date
Skoda Superb hatchback

"I need a practical car for golf clubs and luggage now I've retired. What will £18,000 buy me?"
Skoda Superb SportLine Plus added to range
Skoda Superb Estate

Owner upset at string of errors with new Skoda Superb