Even though the Skoda Superb is a sizeable, luxurious car, it shares components with compact, economical models from elsewhere in the VW Group. This means that the Superb shouldn’t cost a lot more to run than other, smaller cars in the Skoda lineup, especially the economical 1.6-litre diesel model.

From 2020, buyers also had the option of an alternatively fuelled Superb iV, using a similar plug-in hybrid powertrain to the Volkswagen Passat GTE. With a 34-mile electric range and low company-car tax rating, this is especially popular with business drivers.

The Superb offers two diesel engines, a 1.6-litre version that used to be called GreenLine and a 2.0-litre engine with either 148 or 187bhp. The former is rated at 118bhp and manages up to 52.3mpg on the WLTP combined cycle. It's only available on S and SE trim levels. Producing 142g of CO2 per kilometre, it slots into a middling Benefit-In-Kind (BiK) bracket for business users. 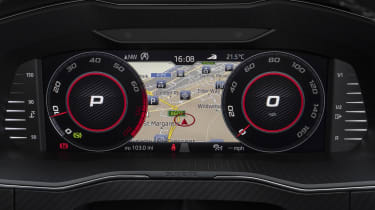 However, the real surprise is that the punchy 148bhp 2.0-litre TDI manages economy of up to 58.5mpg and a lower BiK band as a result, thanks to CO2 emissions of 127g/km. Even the very fast 187bhp engine manages up to 49.7mpg in some trims. But team either of the two 2.0-litre diesels together with four-wheel drive, and the economy figures suffer. Fitted with DSG and four-wheel drive, the 187bhp car drops economy to 45.6mpg and a much higher BiK rate.

From 2020, Skoda is expecting up to a quarter of Superb buyers to opt for its plug-in hybrid Superb iV, mostly instead of its 2.0-litre diesel models. The iV uses a 1.4-litre petrol engine, electric motor and battery pack for hybrid driving and an electric-only range of up to 34 miles. According to the WLTP testing cycle, this nets around 200mpg, but precise fuel economy will depend entirely on how often you top up the battery pack and how much you need to use the petrol engine. Long motorway journeys will see the petrol engine work harder and fuel consumption rise accordingly, while local journeys may not use any fuel at all. Charging the battery from a 3.6kW wallbox takes 3.5 hours and business users will enjoy a much lower BiK band than the rest of the range, bringing significant cost savings. 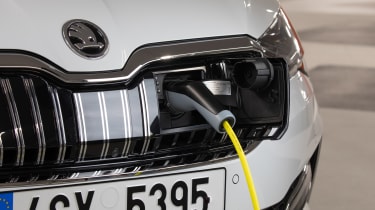 Lower-mileage users might be more tempted by one of the petrol-engined Superbs. The least expensive model is the 148bhp 1.5-litre TSI, which manages an official figure of up to 45mpg. This is largely due to cylinder-deactivation technology, which essentially reduces the size of the engine when full power isn’t needed. Its CO2 emissions are from around 140g/km.

Those interested in performance may find the 2.0-litre TSI-engined car appealing, though it is markedly less economical. There are two versions available, and the smallest 187bhp engine returns 39.2mpg. The other, with 268bhp, four-wheel-drive and a DSG gearbox, will achieve 33mpg with CO2 emissions of 190g/km, resulting in a high BiK rating.

It’s worth noting that the four-wheel-drive version of the 2.0-litre TDI and all the 187bhp diesel engines require periodic topping up with AdBlue, a fluid automatically injected into the exhaust system which actively reduces exhaust pollutants and helps the car to meet Euro 6 emissions standards.

As with any range of cars with a broad choice of engines, the insurance ratings for the Skoda Superb vary across the range. The lowest rating is enjoyed by the 118bhp 1.6-litre TDI diesel in S trim, which sits in insurance group 14. Most models, though, sit in groups between 17 and 21. The most expensive models to insure will be the most powerful 2.0-litre TSI models, the 268bhp version of which has a group 31 insurance rating in Sportline trim. The most powerful diesel engines are in groups 26-27.

Your Skoda Superb servicing intervals can follow either of two regimes. The easiest to understand is the fixed interval plan, where the car is serviced once a year or every 10,000 miles. This is the recommended programme for low-mileage drivers or those who mainly make shorter journeys, or who do a lot of driving in an urban environment where the car is subjected to a lot of repetitive stopping and starting.Skoda offers a service plan to cover your first two services at a cost of just under £300.

The other way to ensure that your car is maintained appropriately is to ask to be set up for variable interval servicing. In this case, sensors on the car monitor the way the car is driven and will self-determine when a visit to the workshop is due, which could be anywhere from 9,000 to 20,000 miles, but services won’t be any longer than two years apart.

This might be worth looking into if you’re mostly on motorways making primarily long journeys at consistent speeds, where the car is less likely to be subjected to the stresses of stop-start driving. For further advice we suggest contacting your Skoda dealership.

Skoda offers the same warranty for the Superb as on the rest of the range. It’s a three year/60,000 mile warranty, unlimited in mileage for the first two years but then capped to 60,000 miles in the third. You can extend the standard warranty to last for four years/80,000 miles or 5 years/100,000 miles, but there’s an extra charge of £300 or £630 respectively.

It seems a shame that Skoda, which prides itself on the quality and reliability of its products, doesn’t offer a longer free warranty to compete with certain rivals. Hyundai, for example, offers a five-year/unlimited-mileage warranty as standard.