Large executive cars continue to hold vast appeal and cachet. We pick out 10 of the best.

The best large executive cars offer space, comfort, speed and cutting-edge tech to their buyers, a number of whom may well be company-car drivers. None of the models on this list cost less than £30,000 and quite a few are much more, especially once a few choice options have been added. That means you’ll either need deep pockets to buy one yourself or a very respectable company-car allowance.

Relatively big petrol and diesel engines are often to be found under the bonnets of large executive cars but a number are now offered as plug-in hybrid and fully electric, in recognition of the fact that low CO2 emissions have a very positive effect on BiK tax liability for business users. 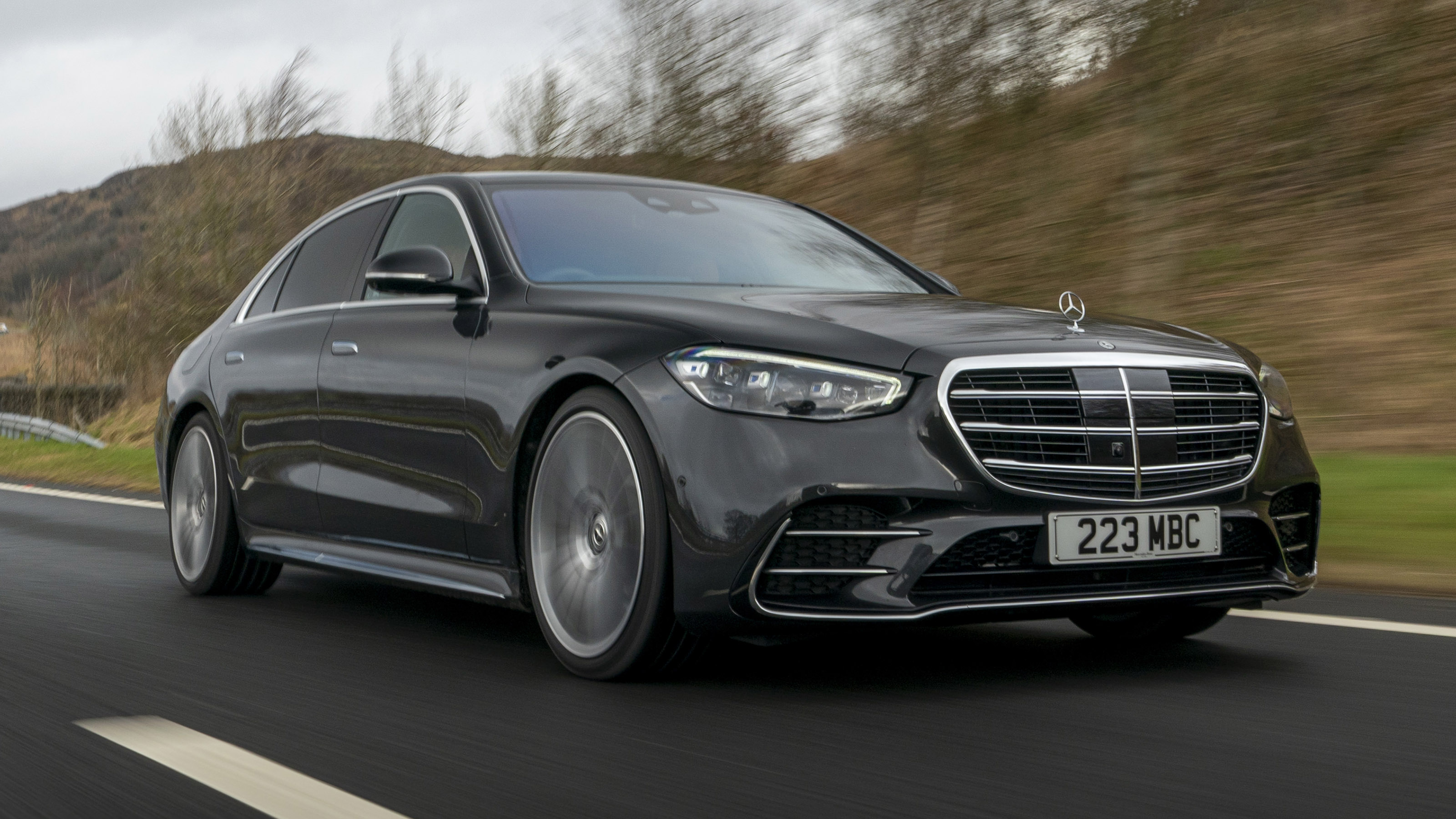 Low running costs need to be tempered with decent performance, as drivers of these cars often do big annual mileages, including motorway journeys. This poses a challenge for manufacturers, as heavy, powerful cars can be fuel-hungry. As a result, large executive cars are usually some of the first to benefit from the latest fuel-saving and power-boosting technologies.

Another hurdle for large executive cars to overcome is that they should be enjoyable to drive when required, yet offer effortless cruising abilities when not. They also often double up as family vehicles, meaning issues surrounding practicality can’t be ignored either.

Fortunately, regardless of these challenges, there are plenty of cars that will easily meet your needs. Read on to find out our 10 best large executive cars.

Put simply, the latest BMW 5 Series is all the car you could ever need. It features a beautifully built interior, excellent passenger space and – crucially – the best driving experience in its class. The 520d is the pick of the range for private buyers, going from 0-62mph in less than eight seconds, yet returning around 45mpg in combined urban and motorway driving. Company car drivers should instead choose the plug-in hybrid 530e model, which can manage the 0-62mph sprint in around six seconds and offers a low Benefit-in-Kind rate of just 12%.

Inside, state-of-the-art electronics and infotainment systems are blended perfectly with luxury woods and leathers, while the 5 Series is also the first car to offer wireless Apple CarPlay connectivity. It may look pretty similar to the outgoing model, but given that car continues to cut a dash on the road, we can understand why BMW took an evolutionary approach when designing the seventh-generation 5 Series.

The Mercedes E-Class is an absolute gem of a car. From a purely aesthetic point of view, its understated looks carry just the right amount of prestige without shouting about it too much. Climb aboard and it’s a similar story, as the dashboard and interior design somehow manage to offer traditional luxury with a thoroughly modern ambiance. The Mercedes star on the front means it’s packed full of the latest safety systems, while the brand carries a certain kudos many consider unmatchable.

While the Merc is not quite as sharp to drive as the BMW 5 Series, some will prefer the more relaxed approach it offers. That, together with conventional engines that return up to 72.4mpg or take you from 0-62mph in under six seconds (as well as the tax-busting 350e hybrid), make the E-Class hard to beat.

The latest Audi A6 has all of its predecessor’s premium appeal, but the evolutionary body design possesses a dash of extra dynamism thanks to some sharp creases, flared wheel arches and a powerful grille flanked by swept-back headlights. Inside is where the real advances are evident, though, as Audi has pulled out all the stops to give its E-Class and 5 Series rival some seriously sophisticated technology. Top-spec models get Audi’s impressive Virtual Cockpit instrument pack, plus a big infotainment touchscreen at the centre of the dash, and a smaller touchscreen below for climate control and other ancillary functions.

Driving the A6 couldn’t be more relaxing, thanks to an array of safety and driver assistance technology that has trickled down from the A8 luxury flagship. This includes active cruise control with steering assistance and a City Assist function which watches out for vehicles emerging from side streets that haven’t seen you. With super-frugal mild-hybrid powertrains offering up to 62.8mpg in the 2.0-litre diesel version, the A6 is a technical tour de force, while being smooth and comfortable enough to soothe even the most harassed executive’s troubled brow.

Porsche has long held a reputation for building some of the finest sports cars in the world but it also knows a thing or two about the executive market. Much like the Panamera, the Taycan is a four-door Porsche with plenty of luxury mixed with driving pleasure. only this time it’s a fully electric car. There are a number of different versions of the Taycan available, but be careful with Porsche’s long and tempting options list because it’s easy to get carried away and spend a lot more than the car’s original base price.

Range varies from 208 to 301 miles across the various models, so all should be more than capable of taking on long journeys and proving easy to live with. The Taycan is a zero-emission car, so it qualifies for some huge savings on both VED (road tax) and Benefit-in-Kind taxes, as well as avoiding the Ultra Low Emission Zone charge, should you find yourself driving into London.

The Jaguar XF is more involving to drive than the Mercedes E-Class, and arguably has more character. Just like most Jags, the XF is stunning to look at thanks to a poised, swooping design and the brand’s signature ‘J’ daytime-running lights. On the inside, the cabin has been designed to evoke the same feeling of a luxury yacht and the newly added PIVI Pro infotainment system is slick and keeps the seven-year-old saloon feeling cutting-edge.

The XF drives as sharply as any Jaguar should, with its direct steering making the car feel much smaller than it actually is. The majority of the XF engine range receives mild-hybrid assistance to boost fuel economy, however none can quite match those offered by Mercedes and BMW rivals in terms of outright efficiency. Minor quibbles aside, the Jaguar XF returns up to 70mpg, incurs as low a Benefit-in-Kind (BiK) rate as 20% and has a base price that is significantly lower than those of German rivals.

When it first arrived back in 2012, the Tesla Model S tore up the rulebook for electric cars (EVs). Firstly, it looked better than any EV before it, and secondly, its 300-mile-plus range signalled electric cars could now be a genuinely practical proposition. The Model S doesn’t just impress as an electric car, though: it’s a thoroughly convincing car, full stop. It’s beautifully minimalist inside, with plenty of customisation options and a huge, easy-to-use touchscreen taking pride of place in the centre of the dashboard. The Model S also has more luggage space than almost any other car on sale today thanks to its two boots and you can even order a pair of rear-facing child seats that rise up out of the boot floor.

No doubt the Tesla is expensive, but once you’ve bought the car, running costs will be as low as possible. Tesla’s network of super-fast Superchargers can replenish the Model S’ batteries to 80% in just 40 minutes. Speaking of speed, the top-of-the-range Model S Plaid can go from 0-62mph in less than two seconds, making it the fastest-accelerating production car ever.

The original Audi A7 single-handedly revived the large executive hatchback class in the mid-2000s, stirring memories of models such as the Saab 9000, Rover 800 and Ford Granada. The second-generation model is bristling with up-to-date technology and looks more distinctive than its predecessor, with a sleeker teardrop design. Particular highlights include the dual-screen infotainment set-up and the LED tail lights that perform an animated sequence each time you approach the car.

The A7 is available with powerful V6 petrol or diesel engines and incorporates 'mild hybrid' technology, so it's surprisingly efficient for such a large and luxurious car. There is also a petrol plug-in hybrid powertrain found in A7 TFSI e models which offers up to 31 miles of pure-electric driving range.

The Lexus ES is designed to pinch sales from the almost ubiquitous German executive cars, and provides an interesting alternative for drivers who want to express a bit of individuality. The ES certainly stands out visually, with its cascading grille and complex body curves and creases. Lexus is renowned for build quality and the ES is no different; the interior boasts some lovely Japanese-inspired trim finishes and a flashy 12.3-inch infotainment screen – although a lack of Apple CarPlay or Android Auto compatibility is a bit of a gaffe.

Lexus ploughs a relatively lonely furrow by only offering the ES with a petrol-hybrid powertrain; most cars in the class favour diesel. Economy figures of 60mpg and emissions of 106g/km suggest that’s not such a bad idea, especially with a 22% Benefit-in-Kind rating that undercuts those of many rivals. Front-wheel drive and no manual option underlines the fact that Lexus isn’t taking on the German Nurburgring warriors. Instead, a superbly cosseting ride and great refinement appeal to those who prefer to travel at a gentler pace.

The latest Volvo S90 is even more focused on cosseting comfort than the Mercedes E-Class and Audi A6. In the S90’s favour are its distinctive looks, beautiful and modern dashboard (that’ll be familiar to XC90 owners), seats that offer peerless comfort over long journeys and the standard Pilot Assist system. This offers semi-autonomous driving at speeds up to 80mph, furthering the S90’s status as one of the most relaxing cars on sale today.

Volvo now offers the S90 in plug-in hybrid ‘Recharge’ guise only. This should provide an impressive 55 miles of electric driving range and attract a low BiK rate of 11%. Although the Volvo’s electrified powertrain allows for punchy acceleration (0-62mph takes just 4.7 seconds), it is far from a sports car and is more suited to wafting down the motorway.

Mercedes pretty much invented a new class of car with the first-generation CLS, and the latest, third-generation model builds on its predecessors' success. Based heavily on the Mercedes E-Class, it's intended to be a sporty and stylish counterpart to its more sober-suited cousin – especially in high-performance Mercedes-AMG CLS 53 guise. For those looking for something less thirsty, there is also the option of the diesel-powered CLS 400d. This is still brisk when accelerating and should return around 40mpg.

A mild facelift in 2021 introduced Mercedes’ latest MBUX infotainment system and a few exterior tweaks to keep the CLS looking sharp. However, its true downfall is that the CLS is not as practical as the E-Class, with rear-seat passengers in particular paying the price for those swoopy looks in terms of reduced headroom. The boot isn't as big, either, at just 520 litres; 20-litres less than the E-Class which also boasts a wider opening.

Want something premium but don’t need the extra space? Check out our list of the top 10 best small luxury cars