Whether you are searching for your next family car or browsing hybrid alternatives, it can become a challenge to find what is right for you. We have put together a list of our best hybrid family vehicles to take the leg work out of searching.

The list of cars we’ve compiled below consists of hybrid versions of the types of car found to be most popular with families, including SUVs, estates and family hatchbacks - cars that are a similar size to a Volkswagen Golf and Ford Focus. MPVs, also known as ‘people carriers’, are becoming less popular as buyers continue to favour SUVs, so there aren’t many hybrid versions of them around. The Ford S-MAX and BMW 2 Series Active Tourer 225xe have you covered if you're keen on a hybrid MPV.

There are plenty of hybrid family cars to choose from if you want something that’s spacious and economical but doesn’t run on diesel. On another positive note, hybrids tend to be much cheaper than pure electric cars too, so they occupy the middle ground and should be a good compromise between value-for-money and economy. 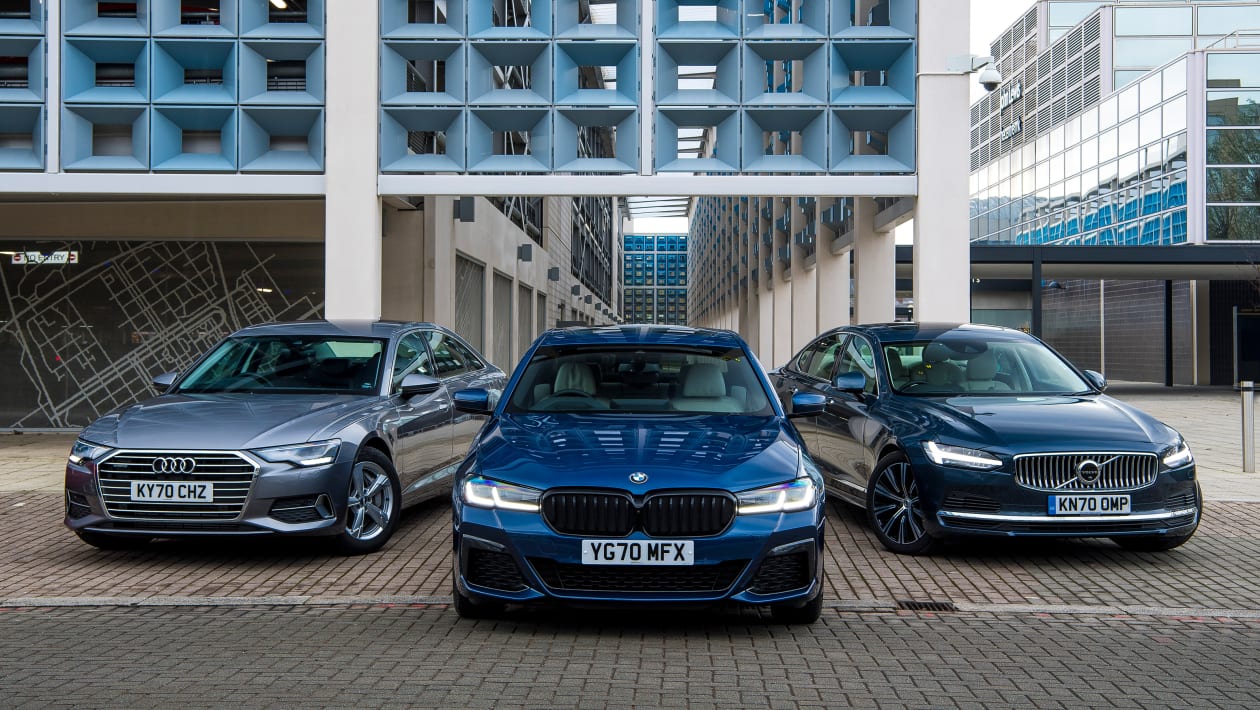 There are three types of hybrids: regular 'self-charging hybrids' (sometimes called HEVs), mild hybrids (mHEVs) and plug-in hybrids (PHEVs). All use a combination of an engine (usually petrol), an electric motor and a battery to reduce fuel consumption and CO2 emissions. The first two types typically use the engine to recharge the battery, but plug-in hybrids have much bigger batteries and need to be charged from the grid. They can also manage a much longer range on electric power alone; current PHEVs manage between 30-60 miles of electric range, compared to just a couple of miles for standard hybrids. Plug-in hybrids offer incredible fuel economy figures but it’s worth noting that you won’t achieve anywhere near these figures unless you keep the battery topped up and do most of your driving around town.

Wallet-friendly running costs aren’t the only attributes family-car buyers are looking for. In-car technology can be a big motivator behind a purchase, and the sheer amount of competition within the car industry means that carmakers are often including ever more impressive gadgetry in their cars, whether these be safety features, driver aids or infotainment systems to entertain your passengers. All of these cars can be ordered with sat nav, smartphone connectivity and multi-zone climate control, plus driver assistance features like cruise control, parking sensors and hill-start assist.

New cars actually need lots of onboard driver assistance tech to pass the stringent Euro NCAP safety tests, and all these have a full five-star score, which should particularly appeal to buyers with children.

Practicality is often a key consideration, too - a family car will be compromised if the boot isn't big enough for your requirements. Cars with flat-folding seats impress us, as these can create a large, flat loading bay for bulky items when the seats are down. Sometimes, the batteries in a hybrid car can reduce boot space, which is worth remembering if you’re looking at figures from a non-hybrid version.

We were impressed by the Hyundai Tucson and found it to not only have impressive styling but it was also great to drive. In fact we were so impressed by the Tucson that it won our 2022 Car of the Year award. You can choose between a mild hybrid (MHEV) or a plug-in hybrid (PHEV) with the latter being the most economical version. Inside, it feels modern and a step ahead of the previous generation, with clear design and sharp graphics for the infotainment. There is also good space for a family and their luggage.

The benefit of the hybrid system isn’t just apparent at the petrol pump, either – the Hyundai’s electric motors give the plug-in hybrid SUV a boost in power and added responsiveness.

If you want a smooth, powerful and economical estate, you’ll be well served by the Volvo V60 Recharge. The Volvo has a 529-litre boot (unchanged from the non-hybrid models), which is bigger than the BMW 3 Series Touring and Audi A4 Avant - not to mention the larger Skoda Superb. The cabin is shared with more expensive Volvo models, and includes a crisp portrait touchscreen and lots of plush materials.

With a total output of 399bhp, the V60 Recharge hits 0-62mph in just 4.9 seconds and is capable of travelling for up to 30 miles on electric power alone. A fuel economy figure of 134mpg is quoted but you can expect to knock the ‘1’ off when you’re only using petrol power. Besides the V60’s price and it not being particularly compelling to drive, there are very few downsides.

There are very few cars better suited to families than the Skoda Superb Estate, thanks to its combination of a huge boot, a well-equipped spacious interior, handsome looks and great value-for-money. Its diesel engines are economical and it’s available with several powerful petrol engines, but the latest Superb iV plug-in hybrid model might cater for those looking for a mix of efficiency and performance.

It’s said to manage up to 148mpg, emits between 27 to 33g/km of CO2 and can hit 0-62mph in 7.8 seconds. Recharging the 13kWh battery takes about five hours, and the charging port is cleanly hidden within the front grille. Hybrid models have 150 litres less boot space than the petrol and diesel cars, but the 510-litre boot is still generous.

We couldn’t come up with a list of favourite hybrid vehicles without including our top plug-in vehicle in our Best Car awards 2022. The Mercedes A-Class was already a popular vehicle before it was offered as a hybrid, thanks to clever design and good driving manners. In plug-in hybrid form you can travel upto 37 miles on electric power alone – enough for most people to do their commute without using the petrol engine at all. Even better news is that you can travel up to 87mph on battery power so even those that commute on motorways can take advantage of the electric range.

As with any prestige brand, the materials inside feel premium and the technology is cutting edge. The onboard system features artificial intelligence, which allows you to ask to be guided to a destination without the need for an exact address.

For a long time, the best-selling BMW 3 Series has been the 320d diesel, thanks to its blend of performance and economy. But now that diesel sales are dropping, BMW expects a lot of buyers to convert to the 330e plug-in hybrid. It hasn’t rested on its laurels, though, as the latest 330e is much better than the previous model. When the battery’s fully charged, it’ll manage between 37 and 41 miles of zero-emission driving and so it has fantastically low running costs, which both business and private buyers will appreciate.

Despite its tax-busting credentials, the 330e is just as good to drive as any other 3 Series, and the two forms of power come together to surpass 0-62mph in just six seconds. Like other cars on this list, the boot is smaller than standard because of where the batteries are placed but BMW introduced a 330e Touring estate version last year for those who require more luggage space.

You won’t miss the Lexus NX if it passes you on the road – the angular styling and prominent grille has become a signature of the brand. A sombre colour tones down the edgy styling for those that like to be a little more incognito when on the road. Inside, the cabin is spacious and well equipped with a clear centre screen that has Apple CarPlay and Android Auto, and everything falls within the driver’s eyeline when you’re sitting behind the steering wheel.

The NX is available both as a hybrid and plug-in hybrid, with up to 40 miles of range on a single charge if you go for the NX450h plug-in hybrid model. This version is also faster but more expensive to buy than the hybrid NX350h. Both models are slightly larger than the previous generation and offer more space than plug-in rivals such as the BMW X3 or Mercedes GLC.

Cupra became its own brand after spinning off from the SEAT brand, although it is still influenced by the Spanish manufacturer. The Formentor was the first fully fledged Cupra vehicle and has an angular body that at a glance appears more like a sports car than a family SUV. This compromises boot space compared to a Cupra Ateca but the seating front and rear is still roomy enough for a family.

The Formentor won our Best Hot SUV award in our Best Car Awards 2022 and is available in several specifications and engine types to include two plug-in hybrid models that vary in power. If you want to match the sportier styling with the larger wheels and trim pieces, you will want to look for the V2 model or higher. However if a comfortable ride is a priority the V1 model will be a better match.

The Kia Sportage offers three levels of hybrid power, starting with the mild hybrid, then the self-charging hybrid and finally the plug-in hybrid. The one that will work best for you will depend on your mileage and budget, but the plug-in model has a range of 43 miles from a full charge.

The interior features premium materials that help the Sportage compete with more expensive brands. Headroom and shoulder room is ample for four adults, so a family with older or taller children should feel comfortable in the Kia. This is matched by a large boot so long journeys or packing for a holiday shouldn’t be a problem.

Overall, the new Sportage impresses us, despite strong competition from the Hyundai Tucson and Volkswagen Tiguan.

The first-ever MINI Countryman plug-in hybrid is one of the best hybrid SUVs you can buy right now. Practicality is down on the petrol and diesel versions (the rear bench no longer slides and the boot is slightly smaller) but the seats are mounted high for good visibility and their 40:20:40 split means they’re versatile.

The MINI has plenty of kerb appeal, especially as you can have Cooper S badges fitted. Don’t think it’s not worthy of the sporty badge, though; it’s the fastest-accelerating model in the range, hitting 0-62mph in under seven seconds. The 1.5-litre petrol engine drives the front wheels and the electric motor drives the rears, meaning the Countryman is four-wheel drive. It’ll manage up to 30 miles of electric range between charges.

The name may not be associated with excitement, but the Toyota Corolla is a genuine alternative to the Ford Focus, Kia Ceed and Vauxhall Astra. The Corolla is even more efficient than the C-HR (with which it shares its engines), and both 1.8-litre and 2.0-litre engines can return over an average 60mpg. You don’t have to plug it in - just fill up with petrol like a normal car. We’d expect the 1.8-litre engine to be sufficient for most buyers, getting from 0-62mph in under 11 seconds. The 2.0-litre is much faster, at 7.9 seconds, but does sacrifice the size of the boot slightly.

It’s not particularly fun through corners, instead excelling at comfortable and relaxed driving. Inside is spacious, and the touchscreen now comes with Apple CarPlay and Android Auto so you can use your phone’s apps on the screen.

Check out our guides to the Top 10 most economical family cars of 2022 and the Cars with the biggest boots.