Hybrid SUVs and 4x4s can be as cheap to run as family hatchbacks, yet also offer lots more space. Here are 10 of our favourites.

​The rugged looks, raised ride height and off-road capability that SUVs offer used to result in high running costs but cleaner engines and clever hybrid technology has seen many hybrid SUVs emerge in recent years that are significantly more economical than before.

Most hybrid 4x4s use a petrol engine and an electric motor to provide power. In plug-in hybrid SUVs (PHEVs), these systems can work together to provide maximum acceleration when you need it but can also run independently. This means you can run on electric power in town, while high-speed cruising on the motorway is managed by the petrol engine.

Many of the SUVs on this list are PHEVs, which means you need to charge the batteries at home or at a public charging point. Doing so allows you to complete short journeys without using a drop of fuel. The only drawback is that PHEVs tend to cost more to buy than ‘self-charging’ hybrids that don’t need plugging in.

Even without plug-in functionality, hybrid 4x4s offer far better economy than their predecessors and they also tend to emit relatively little CO2. Perhaps even more significantly, company-car drivers’ Benefit-in-Kind (BiK) liabilities are based on CO2 emissions; this means the extra cost of hybrid SUVs over their petrol or diesel counterparts can often be offset against your obligations to the taxman.

These are the top 10 best economical hybrid SUVs on sale right now. Once you’re done, why not read our guides to the best used hybrid cars and best hybrid family cars?

You can also get the latest electric and hybrid car news, reviews and analysis on DrivingElectric.com

The Hyundai Tucson impresses with its striking exterior and plush interior, which puts many more premium rivals to shame. All cars get the top-of-the-range 10.25-inch central infotainment touchscreen and digital instrument cluster set-up, something that’s usually an optional extra on other cars. The Tucson is spacious, too; the small transmission tunnel makes it easy to seat five and the boot is one of the best in class at 620 litres.

All models barring the entry-level version of the Tucson come with some form of hybrid assistance - whether that be 48-volt mild, self-charging or plug-in. We recommend opting for the frugal 227bhp 1.6-litre self-charging hybrid. This has plenty of motorway pulling power and is quiet and economical around town, managing around 50mpg. While the PHEV offers an impressive 200mpg and 31 miles of pure-electric range, this model is quite expensive and is only recommended for company car drivers.

Once a budget family workhorse, the fourth generation of Kia Sorento has transformed the seven-seater into a great value alternative to premium-badged rivals. Although not quite as avant-garde as the equivalent Audi, the Sorento’s interior feels well screwed together and comes with plenty of standard kit including dual-zone climate control, a 12.3-inch digital driver’s display and an eight-inch touchscreen with Apple CarPlay and Android Auto functionality.

The Sorento is, in fact, very economical for such a large car. The entry-level 1.6-litre petrol hybrid engine feels brisk thanks to the instant torque from the electric motor, plus it can manage around 40mpg. The star of the show, however, is the plug-in hybrid powertrain which can manage up-to 35 miles on a single charge using electric power alone - although, it is worth noting that this is only available in top-spec ‘4’ trim.

While Lexus has always produced dramatic and contemporary car designs, they have also lagged severely behind premium rivals such as BMW and Mercedes when it comes to technology. The latest Lexus NX bucks this trend with a familiar exterior design, but a revolutionised interior. The new ‘floating’ 14-inch touchscreen is a big improvement over Lexus systems of old and the digitised climate control dials are modern, yet functional.

The Lexus NX is offered as both a self-charging and a plug-in hybrid. The 302bhp plug-in has low running costs and an electric range of around 40 miles. While this model is expensive, its low Benefit in Kind band makes it appealing for company car drivers. Private buyers should instead opt for the self-charging hybrid in the NX400h because this is significantly less expensive to buy outright and still remains frugal to run.

If style is your motivation for buying an SUV, then you’ll love the chic looks of the Renault Captur. Essentially a jacked-up version of the Renault Clio supermini, it shares many of that car’s benefits such as a portrait-style touchscreen – similar to that you’d find in a Tesla. Another benefit is the standard sliding rear bench seat which can recline for maximum passenger comfort or slide forward to allow for an impressive 536 litres of boot space.

For buyers looking to keep running costs to a minimum, Renault offers two ‘E-Tech’-badged hybrid versions of the Captur; one has a self-charging hybrid engine while the other uses a plug-in hybrid unit that offers up-to 30 miles of electric driving range. We recommend, however, opting for the less-expensive self-charging hybrid. This model starts from around £25,000 and still returns more than 55mpg.

The latest Kia Sportage is one of the most distinctive-looking SUVs on sale thanks to its quirky, angular design and boomerang-shaped headlights. On the inside, the Sportage feels just as special thanks to several ideas taken from the brilliant Kia EV6 electric car. The optional dual-screen 12.3-inch infotainment system is slick and easy-to-use and the touch-sensitive climate control panel feels futuristic. Underneath, the Kia shares many of its parts with the Tucson and has similarly roomy rear seats and only a slightly smaller boot, at 591 litres.

Just like the Tucson, the Sportage is available with both as a 227bhp self-charging hybrid or as a plug-in hybrid with 261bhp; however on the Sportage, the PHEV boasts a whopping 40 miles of pure-electric range. One drawback of the Sportage is its slightly harsh ride quality. However it should remain comfortable over long distances.

Besides a high price (something that affects most plug-in hybrids), the Ford Kuga PHEV does plenty right to make it worthy of your consideration. It’s among the best family SUVs for keen drivers, and the 35-mile electric range is more than enough for most daily commutes. The Kuga prioritises electric running well, too.

There’s still a big boot (although slightly reduced compared to petrol and diesel models), and a tech-filled interior, especially as the plug-in hybrid powertrain isn’t available on the entry-spec Zetec trim. The MINI Countryman PHEV is about 2.5 seconds quicker from 0-62mph, but the Kuga never feels like it lacks power.

A car’s running costs may well be the most important factor in your buying decision. The Toyota Yaris Cross is a key example of how you don’t have to sacrifice style for efficiency thanks to its fashionable SUV styling. Just like the regular Yaris hatchback, on which it is based, the Yaris Cross has a smart interior that feels well-screwed-together. Buyers will also find peace of mind with the standard rear-view camera, pre-collision warning system and the Yaris Cross’s five-star Euro-NCAP safety rating. 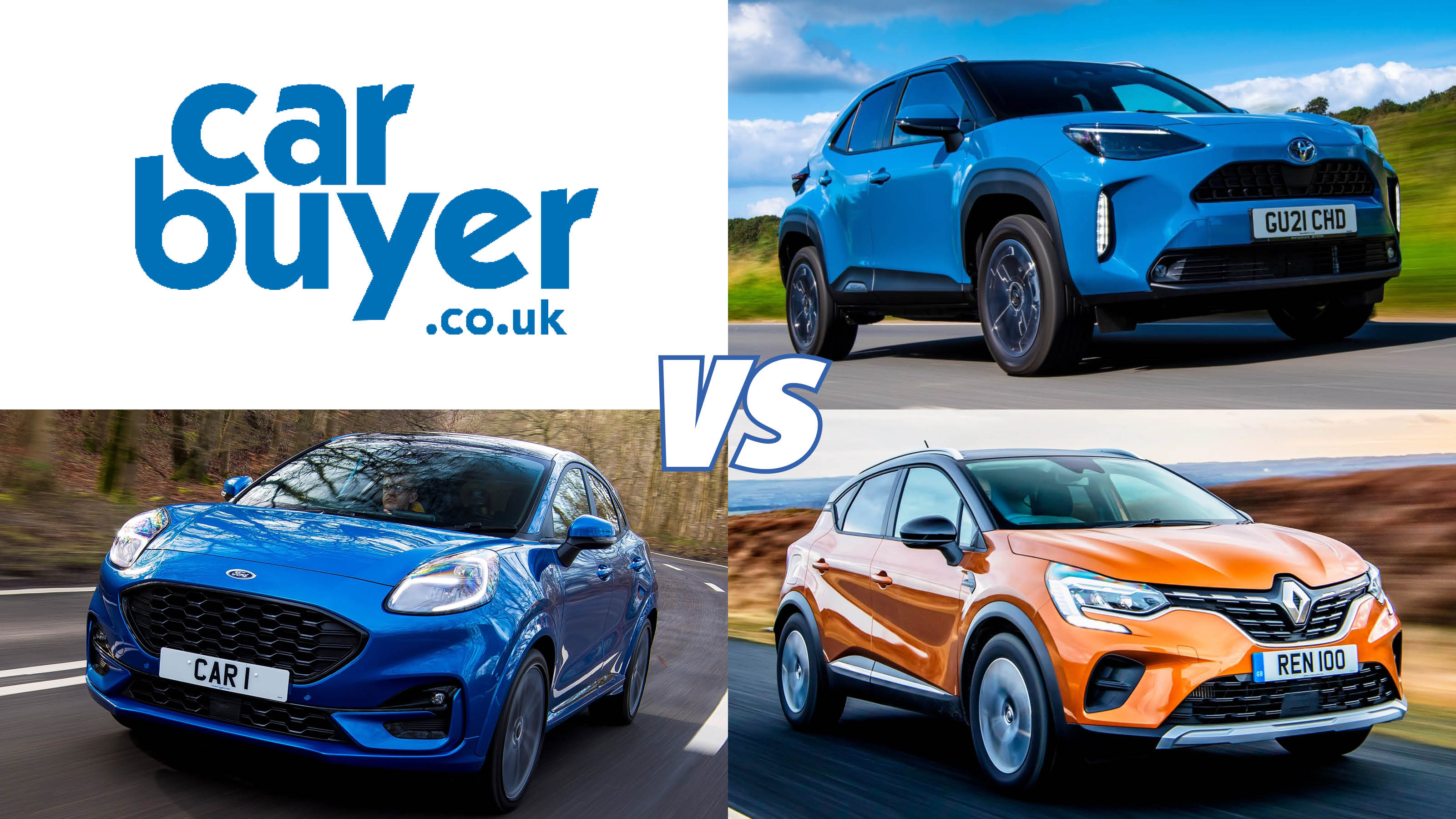 While most cars give a choice between a petrol or hybrid option, the Yaris Cross is only available as the latter. The 1.5-litre hybrid engine produces 114bhp and makes the Toyota feel nippy around town, thanks in large part to the instant torque from the electric motor. Yet, perhaps the main selling point is the impressive fuel economy, which is above 60mpg during normal driving.

Fast, yet frugal, the Jaguar F-Pace stays true to the brand’s legacy of making cars that are great to drive. The plug-in hybrid P400e produces a combined 399bhp from its electric motor and 2.0-litre petrol engine. This will propel the over-two-tonne Jag from 0-62mph in just 5.3 seconds; plus a trick suspension set-up means it hides its bulk very well on a twisty road. However, when you do decide to lift off the accelerator, the F-Pace PHEV is incredibly comfortable and offers more than 50 miles of pure-electric range.

On the inside, the Jag feels stylish and up-to-date, thanks to a recent update that introduced Jaguar-Land Rover’s new PIVI Pro infotainment system. All cars come well equipped with 19-inch alloy wheels, LED headlights, dual-zone climate control, a 360-degree camera, plus leather upholstery with electric front seats. The Jaguar F-Pace also has a roomy 485-litre boot, although this is a lot less than the 620 litres found in traditional petrol and diesel models.

The previous Toyota RAV4 was a little forgettable but Toyota has completely changed the new RAV4 so it’s more noteworthy this time around. The styling is now sharp and aggressive, with pointy headlights, a wide grille and pumped up wheel arches. The popularity of the smaller Toyota C-HR has clearly played a part in the new RAV4’s design. It’s only available as a ‘self-charging’ hybrid (you don’t have to plug it in), combining a petrol engine and an electric motor. Up to 50mpg is claimed in front-wheel drive form, and it’s appealing to company-car drivers with its low CO2 output and tax rate.

Despite that impressive economy, the brisk RAV4 hits 62mph from a standstill in either 8.1 or 8.4 seconds, although the standard CVT gearbox does kill any chance of driving excitement. Inside, the RAV4 is well-made and well-equipped, but the eight-inch touchscreen lags behind its rivals. The graphics are outdated and there are confusing sub-menus, but it does now have Apple CarPlay and Android Auto. The RAV4 also impresses with its space and practicality. A range-topping plug-in hybrid version is due later this year, which is likely to be even more economical.

The BMW X5 is a spacious SUV with oodles of luxury and a great driving experience. Like all BMWs, the X5 feels plush inside, with plenty of soft leathers and flashy aluminium trim. BMW’s top-of-the-range 12.3-inch iDrive infotainment system comes as standard on all models and is one of the best in the industry thanks to intuitive controls and fast loading times. Families will be able to make good use of the X5 large boot and spacious rear seats, which, as an optional extra, can electronically recline at the push of a button.

The BMW X5 xDrive40e plug-in hybrid bagged our ‘Best Large Hybrid’ award in 2021 thanks to its impressive 53 miles of pure electric driving range and intelligent hybrid system; this uses the sat-nav to switch between petrol and electric power depending on which is most efficient on your particular route. It also impresses when you put your foot down, with the 389bhp getting the rather large X5 from 0-62mph in just 5.6 seconds. This, alongside sharp handling and balanced suspension, makes the BMW a true driver’s large SUV.

Want to skip hybrid and go fully-electric? Check out our list of the Top 10 best electric SUVs