Prices for the new Volkswagen Golf GTI will start from £25,845. 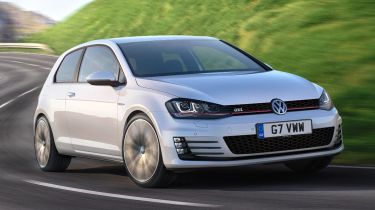 Volkswagen has announced that the new Volkswagen Golf GTI will cost from £25,845, which is £195 more than its predecessor.

Available as both a three-door and a five-door, the Mk7 GTI is the first version of the high-performance Golf offered with two different power outputs. A 2.0-litre turbocharged direct-injection petrol and a six-speed DSG gearbox are fitted to both versions. The standard model produces 217bhp, goes from 0-62mph in 6.5 seconds and has a top speed of 152mph, while an all-new GTI Performance model produces 227bhp, knocking a tenth of a second off the 0-62mph time and increasing a top speed to 155mph.

The extra £980 for the Performance also gets you upgraded brakes with red GTI lettering on the brake calipers, and a new limited-slip differential (called VAQ by VW) for improved grip when cornering. The top-of-the-range GTI Performance with automatic gearbox is priced at £28,895.

When fitted with the six-speed manual gearbox both versions of the GTI return 47.1mpg economy and emit 139g/km of CO2, with stop-start included as standard – making them 18 per cent more efficient than the old model. The automatic gearbox decreases economy to 44.1mpg, with the standard car emitting 148g/km compared to 149g/km for the Performance. Despite the GTI’s improved performance, it actually falls into insurance group 29E – five groups lower than the outgoing model.

On the outside, the characteristic GTI red stripe is present, along with a revised front grille, two chrome tailpipes and sports suspension. Side sills, 18-inch alloy wheels, side sills and a rear diffuser are also fitted as standard.

Safety equipment includes an automatic post-collision braking system, which applies the brakes after an accident to prevent a second collisio;, a pre-crash system that tenses seatbelts and closes windows if an accident is likely, improving the effectiveness of the airbags; front assist vehicle proximity warning that primes the brakes up to speeds of 99mph, city emergency braking to automatically brake the car at speeds below 18mph; and radar-operated automatic distance control that maintains a set distance from the vehicle in front. There are also seven airbags, including one for the driver’s knees.