Maserati Ghibli to debut at Shanghai 2013

The new Maserati Ghibli saloon will be unveiled at the Shanghai Motor Show. 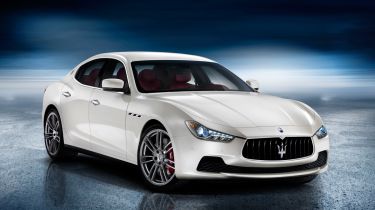 The all-new Maserati Ghibli is set to debut at the Shanghai Motor Show tomorrow, and marks the brand’s intention to increase sales from around 6,000 to 50,000 cars per year, worldwide.

The BMW 5 Series rival is expected to cost from around £50,000 when it goes on sale later this year. UK deliveries will start from September.

It’ll be available with a pair of twin-turbo V6 petrol engines, as well as a 270bhp 3.0-litre V6 diesel – a first for any Maserati. The petrol engines have been, developed with parent company, Ferrari, while the diesel will offer all the performance you’d expect from a Maserati, but with impressive 45mpg economy.

No performance figures have been released for any of the engines, but we predict the fastest, most powerful V6 petrol engine to do 0-62mph in less than five seconds, with a top speed of more than 170mph.

The sleek four-door saloon is based on a shortened version of the all-new Maserati Quattroporte platform. That car is designed to compete with the luxurious Mercedes S-Class and Audi A8, while offering remarkable acceleration and a superior driving experience.

The Ghibli will make its public debut at the 2013 Shanghai Motor Show, with prices and specifications announced nearer the car’s on-sale date in the summer. To view the full Maserati range, see the CarBuyer Maserati reviews page.