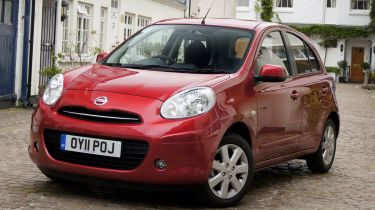 Nissan is set to ugrade its Micra. A new version will be revealed next week that will address some of the quality concerns on the current model.

It has been criticised for its basic feel but the revised car promises a smarter interior.

Nissan’s executive vice president Andy Palmer told CarBuyer: “It will be pretty extensive. The Micra has always been seen as a cute car, but this will make it look more masculine. There will be interior changes too.

“The Micra is a very successful car, and does really well in the likes of Thailand, India and Israel, but we needed something for Europe. It’ll be a ‘big minor change’.”

Insiders say the new car will be significantly different to the facelifted Asian model that was recently unveiled at the Bangkok Motor Show in Thailand.

Meanwhile, more details have emerged of the next model, which is due in 2016. And although it was widely expected production would move to Europe, British cars will be made in Chennai.

And while the current car is seen as a product Nissan can sell across the globe, the next model will move a bit further away from that strategy.

“There will be differentiation between emerging markets and mature markets,” said Palmer.