“Dramatic styling means the Nissan Juke still looks fresh, despite its advancing years. Poor running costs give its age away, though”

The Nissan Juke is largely responsible for making the small crossover SUV as immensely popular as it is today – its styling is still divisive, even at the end of the car’s lifespan, but that hasn’t stopped more than half a million people buying one. The Juke has certainly been a smash hit, and it now has a huge number of rivals to contend with as a result.

When Nissan launched the Juke, it proved you could mix hatchback dimensions with SUV styling for a new winning formula. Today, just a few of its rivals include the Mazda CX-3, Renault Captur, Kia Stonic and SEAT Arona.

To help the Juke keep up with newer contenders, Nissan gave it some improvements in 2014, subtly altering its looks and most importantly making the boot bigger and fitting extra safety equipment. This nudged the Juke in the right direction, but rear passenger space has never been a strong point and the car's interior materials and design are definitely showing their age. 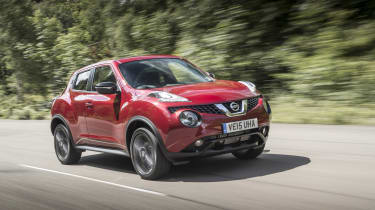 There’s just one petrol engine to choose from: a naturally-aspirated 1.6-litre with 110bhp. It’s not desperately fast, taking 12.5 seconds to get from 0-62mph yet it’s also not very economical, posting a best of 34.4mpg with a manual gearbox.

If you plan on covering lots of miles, the 1.5-litre diesel with 108bhp could also be worth considering. With fuel economy of up to 49.6mpg, it’s the most economical version, even if the 53.3mpg Renault Captur means it’s not class-leading. Acceleration from 0-62mph takes a reasonable 11.2 seconds.

Although the Juke has SUV styling, it was never intended to be taken off-road, so it has relatively firm suspension, which makes it fairly good fun to drive. There’s good body control in corners and plenty of grip, but you don’t get much feedback through the steering wheel and there’s plenty of wind and road noise at speed. That puts the Juke out of contention with class leaders such as the Mazda CX-3. You can’t get four-wheel drive to improve traction, but the Juke can be ordered with an automatic transmission, although the CVT gearbox isn’t exactly a pleasure to use even if it does slightly improve economy and emissions. It’s only available on the petrol engine, and we’d suggest avoiding it unless you really need an automatic.

The Juke is at home in town, thanks to its light steering, small dimensions and reasonably tight turning circle, although visibility could be better, especially with those thick rear pillars.

There are a few trim levels to choose from. Visia is the most basic spec, and gets you air-conditioning, alloy wheels, remote central locking and LED daytime running lights.

We recommend Acenta trim as a starting point, because it adds essentials such as Bluetooth, cruise control, a USB port and LED front foglights. The next trim up, the Bose Personal Edition, is better for gadget fans because it has a 5.8-inch infotainment system with DAB radio, sat nav, a Bose sound system, a reversing camera, painted interior highlights and automatic headlights and wipers.

Tekna is the top-level trim. It’s safer thanks to Nissan’s Safety Shield, with an ingenious around-view monitor, along with lane-departure warning, blind-spot monitoring and alerts if a pedestrian or vehicle moves behind you while reversing out of a parking space. Leather upholstery, 17-inch alloys and heated front seats are thrown in, too.

Ultimately, we’d choose the diesel engine with either Acenta or Bose trim, depending on whether you require the latter’s added technology such as sat nav.

The Nissan Juke finished 27th out of the 100 cars ranked in our 2019 Driver Power owner satisfaction survey of cars currently on sale in the UK; a good score considering how long it’s been on sale. There’s further reassurance to be had from the Juke’s five-star Euro NCAP crash-test score – although this was awarded in 2011 and the procedure has since been made more stringent.