An update in mid-2014 saw the Nissan Juke get a bigger boot, but it still lags behind rivals when it comes to carrying passengers and luggage

Despite its chunky looks, the Nissan Juke is a compact car with a relatively small boot. You should be comfortable enough in the front, but there isn’t much space elsewhere. The heavily sloping roofline means the rear seats aren’t well suited for adults on longer journeys, while rival models have more clever storage nooks and crannies dotted around the cabin than the Juke does. 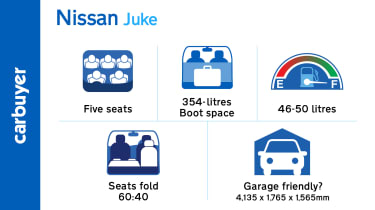 The Juke is billed as a car for people with growing families, but your kids will pretty quickly outgrow the back seats. Legroom is okay and you can squeeze adults in, but it feels quite claustrophobic because of that low roofline. 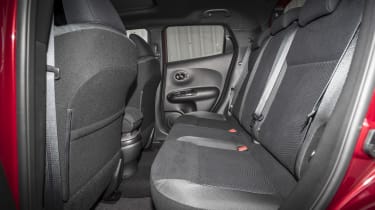 Think carefully about what you're going to use the car for before taking the plunge – if you're regularly going to be transporting passengers and luggage, we'd recommend looking at something like the Citroen C3 Aircross, Ford EcoSport, Vauxhall Mokka X, Renault Captur or Peugeot 2008.

Storage space throughout the Juke’s cabin is pretty minimal. You get two cup-holders in between the front seats and a little rubber mat ahead of the gearstick where you can store your keys. The door bins are a little on the small side and the glovebox isn't too generous, either.

Before its mid-2014 update, the Juke fared pretty badly against its competition when it came to boot space, boasting a fairly measly 251-litre capacity. That's now been increased to 354 litres thanks to a restyled rear end. 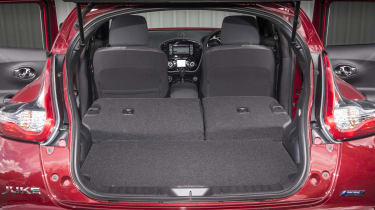 Even with the increased boot space, the Juke still lags behind the Renault Captur – one of its main rivals – which can hold 377 litres with its rear seats slid back and 455 litres with them slid forwards. It's practical touches like these sliding seats that the Juke is missing. Not surprisingly, things improve when the seats are folded down flat. This allows the Juke to squeeze in 1,189 litres of luggage, though it’s still some way off the class-leading Captur’s maximum capacity of 1,235.

If you're interested in the towing capacity of the Juke, then it's useful to know that a braked trailer weighing up to 1,250kg is allowed for the petrol models. Oddly, Nissan doesn’t quote a towing capacity for its diesel model.