The Nissan Juke's engines aren’t the most frugal in this class – but the diesel can return up to 49.6mpg.

One area where the Nissan Juke has begun to lag behind its rivals is in the engine department. There’s only one diesel on offer and the 1.6-litre petrol is not as good as it could be; it feels sluggish compared to more modern engines as it’s not a turbocharged unit. A lot of the power doesn’t arrive until the higher reaches of the rev range, so you may have to rev the engine hard (and reduce your fuel economy) to make good progress.

If the lowest running costs are the main priority for you, then you’ll probably find the 1.5-litre diesel engine is the best option, particularly if you cover a high annual mileage. It isn’t quite as efficient as some of its rivals, returning 49.6mpg. 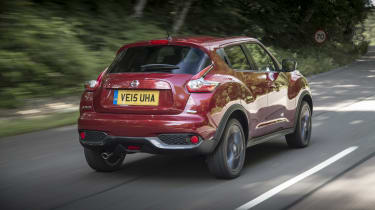 The petrol engine isn’t desperately economical either. It boasts a best of 35.8mpg with the hard-to-recommend CVT automatic gearbox, but with the manual gearbox and the largest 18-inch wheels this drops to a below-par 33.6mpg. Their CO2 emissions shouldn’t matter too much to private buyers these days, because the annual cost of road tax is the same £140 regardless of which engine you choose. For company car drivers though their Benefit-in-Kind rates for the diesel and petrol are high for a car in this class. 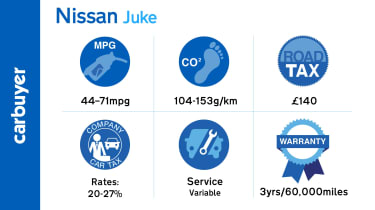 Since they're relatively cheap and come with fairly low-powered engines, most Jukes sit in or around insurance groups 10-11. Pretty much all of the Juke's rivals have similar insurance costs, with the Renault Captur kicking off in group nine and topping out at 15.

The warranty on a Juke is a pretty standard three-year/60,000-mile deal, which is par for the course in cars such as this. It pales in comparison with the five-year/unlimited-mileage and seven-year/100,000-mile warranties offered with the Hyundai Kona and Kia Stonic respectively. The MG ZS, meanwhile, is covered for seven years/80,000 miles, while the SsangYong Tivoli offers a class-leading warranty of seven years/ 150,000 miles.

Nissan pegs the service interval for the Juke at once a year or every 12,500 miles, so proper maintenance shouldn’t be too expensive or inconvenient.