The Nissan Juke’s suspension is set up to be fairly comfortable, but if you hit a large pothole you can feel a bit of a crash being sent through to the cabin. It's a noisy and uncomfortable sensation that more expensive cars tend to iron out.

Handling is reasonable, but don't go thinking the Juke is some kind of sports car – although body roll through corners is fairly well controlled, the steering always feels a bit too light to ever get you truly involved in the driving experience and the Juke doesn’t seem to have as much front-end grip as its more fun-to-drive rivals. There's a fair amount of noise in the cabin at high speeds as well, so it's not the most relaxing long-distance cruiser, either – especially when fitted with the largest wheels.

The Nissan Juke has a 1.6-litre petrol engine producing 110bhp, and it’s available across all trim levels. It takes a leisurely 12.5 seconds to reach 62mph although that is improved marginally to 12.3 seconds with the optional CVT automatic transmission.

The basic 1.6-litre engine never feels particularly fast, and we’re not big fans of the way the CVT gearbox seems to strangle the engine. It makes the car feel slower and sound noisier, so it's probably worth taking a test drive before you make a decision.

Our top petrol engine choice in the Juke would be the DIG-T 1.2-litre turbo, although you’ll only be able to find cars with this engine on the used market now. As well as being more powerful than the basic 1.6-litre petrol, it’s also more economical, emits less CO2 and is a much better fit for the Juke’s offbeat character. Admittedly, though, it was more expensive than the 1.6-litre when new and is likely to be a bit costlier on used examples. 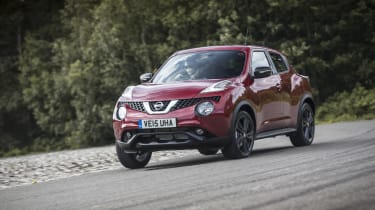 For those who are after a bit more performance, Nissan previously offered a flagship Nismo performance version, with a 215bhp turbocharged petrol engine. The front-wheel-drive version of this car will hit 62mph from rest in seven seconds and go on to a top speed of 137mph. If you go for the four-wheel-drive model (which means you have to pick the CVT gearbox), the 0-62mph time goes up. 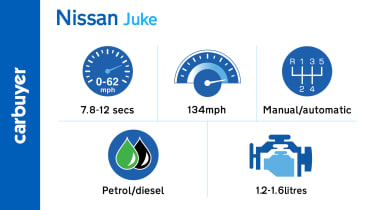 The only diesel engine is the 1.5-litre dCi, and it has pretty decent performance, going from 0-62mph in 11.2 seconds. It's turbocharged, so you get a nice surge of acceleration that you don't get from the non-turbo 1.6-litre petrol. The problem with this engine is that it doesn't sound very nice – it's a bit too rattly. You’ll have to turn the radio up if you want to drown it out.