"The Nissan Juke Acenta has its benefits over the entry level Visia, but is priced against top-spec superminis." 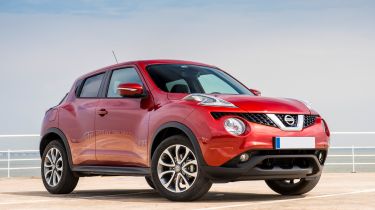 The Juke Acenta has three engines available to choose from. A 1.2-litre turbocharged DIG-T engine and a 1.6-litre engine with an XTRONIC automatic transmission make up the petrol offerings, while a 1.5-litre DCi 110 is the standalone diesel. The diesel is by far and away the most economical, as a claimed figure of up to 70.6mpg completely outperforms the petrol engines for economy. Emissions of 104g/km make it the cheapest to tax too, at just £20 per year. Avoid the 1.6-litre petrol with the automatic gearbox; not only is it the least efficient engine in the range but it strangles the available power and is much noisier on the move.

Price-wise, the Acenta trim occupies an odd blackspot - you can get a high-spec supermini or an entry-level to mid-range hatchback for the same money. The extra equipment over the entry level Visia is beneficial, but for the same money you can have a Ford Fiesta Titanium or a Vauxhall Corsa Limited Edition: superminis that are loaded with luxuries. If you value ride height and stand-out looks, your money will be going on that instead of extra equipment with the Juke Acenta.

The Nissan Juke's dimensions are still small enough to be classed alongside superminis, so it's easy to park, and the tall ride height is beneficial for those who need better access in and out of the car.There's no mistaking a Juke. Its love-it-or-hate-it looks will at the very least cause a debate among your family and friends and despite its shape being on the roads for more than five years, the Juke still manages to stand out from plainer-looking rivals.The diesel is super economical. Capable of a claimed 70mpg on a combined cycle, the engine is pretty much all you'll need. It's not quick, but the engine is better suited to the car than the petrols on offer.

The Juke's shape makes it a very compromised vehicle. It may be tall, but offers cramped conditions for rear passengers. The sloping roofline will do little to comfort tall adults in the back and the boot space on offer is no where near practical enough.The price point is a little awkward. For the same money, you can get a much better equipped supermini or even something like a Kia Rio in high-end 4 spec.Avoid choosing the XTRONIC automatic transmission. The gearbox can feel like its limiting the power the engine has to give and it makes the interior a lot more noisy to be in.