Although it’s getting on a bit now, the Nissan Juke still pleases customers overall, while its five-star Euro NCAP safety rating continues to stand it in good stead.

The Nissan Juke achieved a good overall rating in our 2019 Driver Power customer satisfaction survey, coming in 27th place out of 100 cars. It was rated highly for reliability; of the owners who responded, just 2.9% reported experiencing a problem with their car at least once. That’s the lowest figure of all the cars in our survey.

When issues do arise, the most common problems are related to the electrics, and while customers raved about the Juke's infotainment system and exterior design, issues with running costs, rear passenger space and build quality brought down the overall score. 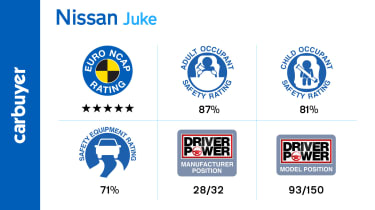 The Juke was also given a 71% safety assistance rating by Euro NCAP, but the 2014 update added a host of new technology that would likely boost this score were the car to be tested again. A large part of that is Nissan's 'Safety Shield' pack (standard on the Tekna model), which includes lane-departure warning, blind-spot warning and moving object detection.

That last system warns the driver of people or objects moving behind the car. The new Juke also gets tyre-pressure monitoring and a 360-degree surround-view parking camera, though they only feature on models fitted with the NissanConnect multimedia interface. It’s also disappointing that the Tekna model’s Safety Shield cannot be fitted to other models, even as an option.