"The Mazda CX-3 crossover is a stylish, fun alternative to models like the Nissan Juke, but can be quite pricey"

Mazda’s UK sales have been increasing in recent years, thanks in part to its SUV range, which includes the CX-3, as well as the larger CX-30 and CX-5 models. The compact SUV segment is incredibly competitive and 2019 saw some of the most popular models, including the Peugeot 2008, Nissan Juke and Renault Captur, enter their second generations. Skoda also launched the Kamiq that year, a great all-rounder in this class.

The Mazda CX-3 is a compact SUV that’s based on the company’s Mazda2 supermini, but it offers a higher seating position as well as the low running costs associated with smaller cars. It received a light facelift in 2018, marked out by a new grille and blacked-out door pillars. The biggest changes were under the skin, aimed at making the car more refined and better to drive. Production of the CX-3 has now ended and there are only a few left in stock, so act fast if you want a new one.

Compact SUVs are not always the most engaging cars to drive. However, the Mazda CX-3 is an exception thanks to a chassis that’s more accomplished than those underpinning its rivals above, coupled with a choice of powerful 1.8-litre diesel and 2.0-litre petrol engines.

Mazda also includes its G-Vectoring technology – software that helps boost the CX-3’s agility by subtly adjusting torque sent from the engine to the front wheels. The same system is also said to improve comfort, reducing the need to make minor corrections as you drive along the motorway.

Admittedly, the petrol engine sounds big for a compact vehicle such as the CX-3, but the less powerful 118bhp version is also reasonably efficient. Thanks also to the CX-3’s relatively light weight (1,230kg) it can return up to 42.8mpg and CO2 emissions of 141g/km.

The 1.8-litre diesel engine is the most efficient: 54.3mpg and 114g/km CO2. Naturally, the four-wheel-drive CX-3s are less efficient, especially the more powerful 2.0-litre petrol version. If you can, stick to a CX-3 with two-wheel drive and a manual gearbox. 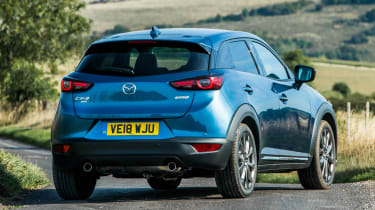 The CX-3 looks expensive compared to some of its newer rivals, such as the Nissan Juke and Skoda Kamiq, but it claws back ground with a good amount of standard equipment, including alloy wheels, cruise control, a digital radio and a seven-inch touchscreen.

The CX-3 might be a compact SUV, but it’s still reasonably practical. For example, its 350-litre boot is similar in size to a Vauxhall Astra. However, it can't hold a candle to the second-generation Renault Captur’s, which comes in at a truly impressive 536 litres, bigger even than the Peugeot 2008’s 434 litres.

Mazda’s reputation for building reliable cars is borne out by its strong showing in our 2019 Driver Power customer satisfaction survey, where the brand came fourth out of 30 manufacturers. On the safety front, at first sight the CX-3’s four-star Euro NCAP crash-test rating doesn't look that reassuring, until you realise that when it was carried out, the test had just been made more stringent.

For this reason, we believe the CX-3 is likely to be as safe as older cars with the full five stars. That said, we’re disappointed by the lack of autonomous emergency braking on lower-spec CX-3s – it’s only available from SE-L Nav+ trim upwards. If you're interested in an SUV of this size and like the Mazda brand, you may want to consider the CX-30 - it's much newer than the CX-3 and has a bigger boot.

“Dear Carbuyer, I want a small SUV that’s easy to get in and out of. What would you recommend for £10,000?”
Mazda CX-3 GT Sport Nav+ limited-edition model revealed 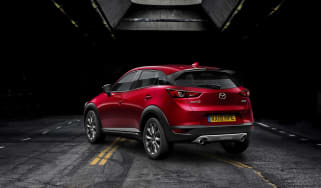 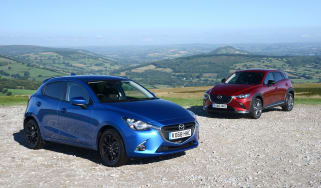 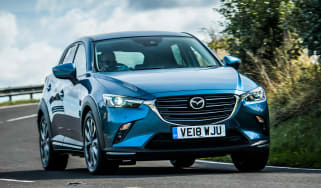 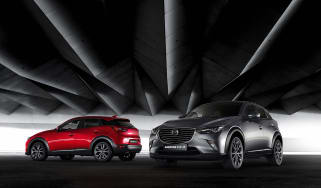