Although the Mazda CX-3 should be quite cheap to run, it’s relatively expensive to buy compared to some of its rivals.

The CX-3 has been meticulously pored over by Mazda with an eye on keeping its weight down. Couple that to the brand's SKYACTIV engine range and you get a mini-SUV that’s more than capable of competing with its rivals in terms of outright fuel economy.

The most economical engine in the range is the 1.8-litre SKYACTIV diesel, which returns an impressive 54.3mpg and has a CO2 emissions figure of 114g/km when paired with a six-speed manual gearbox. This is still some way behind the Peugeot 2008, returning up to 62.7mpg with its smaller 1.5-litre diesel. The CX-3's company-car Benefit-in-Kind (BiK) tax rate is reasonable, and the diesel engine is still the one to go for for business users - the lowest petrol falls into a BiK rating two bands higher. 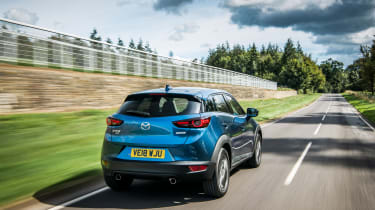 A 2.0-litre petrol engine is also available, but it isn’t as economical as the diesels. In official tests, the 118bhp version returning 42.8mpg in manual form (39.2mpg with an automatic). The two-wheel-drive version emits 141g/km of CO2 (140g/km for the automatic) which, given the car’s size, isn’t too bad. But, with a much smaller 1.2-litre petrol, the Peugeot 2008 can return up to a claimed 50.6mpg.

The range-topping 148bhp petrol model isn’t much less efficient than the 118bhp petrol (it returns 38.2mpg), but it’s only available with four-wheel drive and CO2 emissions are a little higher, at 160g/km of CO2, resulting in a high BiK rate.

After the first year's CO2-based road tax (generally included in the on-the-road price), every version of Mazda CX-3 costs £145 a year to tax.

The CX-3’s insurance groups run from 13 to 19, slightly higher than some of its core competitors. This is perhaps due to the higher standard level of equipment, and Mazda’s slightly more upmarket image.

The CX-3 has an industry-standard three-year/60,000-mile warranty. This is the same as all other Mazda models, but trails behind some manufacturers, such as Hyundai and Kia, which offer five and seven-year warranties respectively.

Mazda offers three-year servicing plans that cost from £500 upfront, or allow you make monthly payments to help you spread the costs. The service interval is once a year or every 12,500 miles.