Mazda is known for producing well built, reliable cars. The data backs this up, as buyers generally report few problems with them, meaning Mazda scores well in customer surveys. The CX-3 features a host of safety technology, but was only awarded four out of five stars in 2015 by Euro NCAP, with 85% adult and 79% child occupant protection scores – although these tests were completed under Euro NCAP’s latest and most stringent assessment criteria at the time. 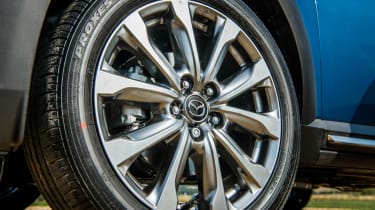 As mentioned, Mazda scores well in driver satisfaction surveys, with the Japanese brand coming fourth out of 30 manufacturers in our 2019 Driver Power survey. Of all the respondents, 16.3% reported a fault within the first year of ownership.

The CX-3 features a host of safety technology, including electronic stability control, six airbags, hill-hold assistance and an emergency stop signalling feature on all models. The mid-range SE-L trim and above also feature lane-departure warning and autonomous emergency braking – although it would have been nice if these were fitted across the range. It’s worth mentioning that the lane-departure warning system only has a weak buzzer, which may not sufficiently grab your attention.