Production of the new five-door SEAT Leon has begun at the brand’s factory in Spain. 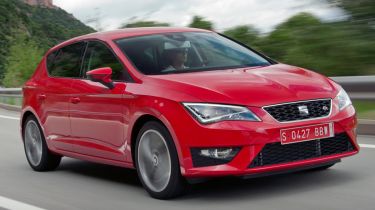 Production of the new five-door SEAT Leon has begun at the brand’s factory in Martorell, near Barcelona, Spain. The new Leon was unveiled at the Paris Motor Show last September, and is available to order now, with the first cars being delivered to customers in March 2013.

The new five-door Leon is the first of three Leon models, a range which will expand over the next 12 months to include a coupe-like three-door SC model and a practical five-door estate ST model, mirroring the range of the smaller SEAT Ibiza.

The all-new car uses the same platform, as the latest Volkswagen Golf, as well as the same range of petrol and diesel engines. Every new Leon is equipped with stop-start technology for greater efficiency – and SEAT claims this means that the new Leon consumes 15 per cent less fuel than the previous generation. The new Leon also weighs 90 kg less and measures 5.2cm shorter than the previous car, yet offers more passenger and boot space than before.

Technical highlights include the fact that the new Leon will be the first car of its size to get full LED highlights as an option.

To prepare for the launch of the new hatchback, SEAT invested 800 million euros (c.£650m) in the plant, securing 1,600 jobs at the factory and 6,000 more in the supply chain. SEAT is looking to expand its sales by offering good-value family cars, and the Leon joins the recently launched Mii city car, new Toledo saloon and revised Ibiza in the car maker’s latest line-up.