Although Nissan doesn't offer a specialised ultra-efficient model of the Pulsar like some rivals, its regular range of petrol and diesel engines is modern, economical and pretty cheap to run, with every version costing £140 in annual road tax.

The cheapest Nissan Pulsar to run will be the one fitted with the 1.5-litre dCi diesel engine. Nissan claims it’ll return up to 78.5mpg and emit only 94g/km of CO2. On a test in varied conditions, including stop-start traffic, we achieved 51mpg, which is pretty good for a real-world figure. It's also worth noting that the official fuel consumption and CO2 figures are a little higher for cars fitted with 18-inch wheels rather than 17-inch items, although not be so much that you'll notice.

However, it's the cheaper 1.2-litre DIG-T petrol engine that'll be the biggest seller in the UK. This little turbocharged engine feels suitably fast, but also returns up to 56.5mpg while emitting just 117g/km of CO2. Choose a version shod with 18-inch wheels and emissions of 121g/km. The £1,350 optional Xtronic CVT automatic gearbox sits slap-bang in the middle of these figures, so isn't noticeably more expensive to run. 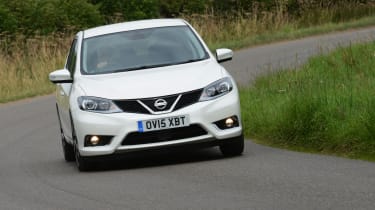 Insurance cover for the Pulsar should be relatively cheap, as it's rated in insurance groups 10 to 18 depending on the exact engine and trim level chosen.

The Pulsar is covered by Nissan's standard three-year/60,000-mile warranty. It’s a reasonable policy and in line with Ford and VW, but is rather less generous than the five-year/unlimited-mileage and seven-year/100,000-mile cover boasted by key rivals like the Hyundai i30 and Kia Cee'd respectively.

The Pulsar’s service intervals are every 18,000 miles for diesel-engined cars or every 12,500 miles for the petrol models. The company has a fixed-price servicing scheme called Service Care that sets the cost of a minor service for petrol and diesel model at £149 and £159 respectively.