The Nissan Pulsar comes with plenty of safety technology, but some of it is optional on basic models

Like most Japanese manufacturers, Nissan has a largely deserved reputation for building robust and straightforward cars that give many years of faithful service. And as the Pulsar uses parts and engines that have already been proven in the extremely popular Nissan Qashqai SUV, the technology is well proven.

The Pulsar also has a top crash-test rating and some of the most advanced driver assistance technology you can get on an affordable family car, so you and your passengers can rest assured it’s a very safe way to travel. 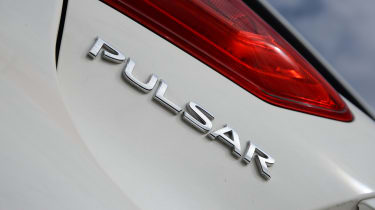 Pulsar owners are generally a satisfied bunch, particularly when it comes to the engines and gearboxes of their cars, while interior comfort and low running costs were also very much in well regarded. The Pulsar's infotainment and connectivity systems came in for praise, too.

Few were quite so enamoured with the Pulsar's ride and handling, and even more disappointing were reports of dubious reliability; 20.7% of owners claim to have experienced one or more faults in the first year of ownership.

The Pulsar was crash-tested in 2014 and received the maximum five-star safety rating from safety body Euro NCAP. In addition, advanced safety systems are a big part of the model’s appeal to buyers. It features autonomous emergency braking as standard with Acenta trim levels and above.

The Tekna model is fitted with a 360-degree camera system, parking sensors, blind-spot monitoring and lane-departure warning. Another clever feature is moving object detection, which alerts you if it notices a child, animal or other unseen object nearby that you might have missed when driving at low speeds.