“With seven seats, the Nissan Qashqai+2 keeps the standard Qashqai’s winning formula of comfort and quality, but adds even more practicality.”

The standard five-seater Nissan Qashqai was the UK’s first ever SUV crossover. Launched back in 2007, it transformed the market by mixing the ease-of-use associated with a mainstream family hatchback with the strength and ruggedness of a compact 4x4. The best of both worlds – practicality balanced by affordability. Only a year later, Nissan followed up with the launch of the Nissan Qashqai+2, which followed the same winning formula but upped the versatility of the car by lengthening the Qashqai and adding an extra pair of seats, a third row, at the very rear of the car. Those extra seats aren’t huge – and are really only suitable for children – but they allowed the Qashqai to compete on an even broader scale than before without losing any of the qualities that made the existing Qashqai such a big success. The +2 was facelifted in 2010 to keep it up-to-date, and it comes in three main specifications – entry-level Visia, mid-range Acenta and top-of-the-range Tekna models. Do remember, however, that the Qashqai+2 is due to be replaced soon by the new Nissan X-Trail.

The 1.6-litre dCi diesel engines are the most efficient on offer in the Qashqai+2, returning a combined fuel economy of 60.1mpg and emitting 123g/km of CO2, which should cost just over £100 a year in toad tax. That’s fairly impressive for a large family car. Even the 1.5-litre dCi returns 53.3mpg on average, and emits 139g/km of CO2 - putting it in road tax band E (so costing approximately £125 a year in annual tax). The petrol 4x4 models are quite expensive to run in comparison, however, because of the heavy four-wheel-drive system, with the 2.0-litre petrol 4x4 model fitted with a CVT automatic gearbox only returning 34.4mpg on average. We’d recommend going for the diesel models in most cases.

The extra length can make parking a chore

The Qashqai+2 retains its smaller five-seater sibling’s car-like drive despite being bigger and longer, proving to be every bit as good to drive. The extra length does sometimes make parking something of a chore, but the car's high driving position does give generally excellent visibility. It drives well on rough roads, with the light steering making manoeuvring very easy indeed considering the car’s larger dimensions. The only real downside is that rear visibility is compromised a bit by the rounded shape of the rear window that does make reverse parking more trouble than it out to be. You can add a four-wheel-drive option if you want to take the +2 off-road, but we still think it feels more at home on the road.

The optional glass roof lets in plenty of light

The longer wheelbase on the Qashqai+2 actually adds to the car’s comfort compared to the standard five-seater Qashqai. The extra length improves the way that it rides over bumps and potholes, making it easier for the suspension to absorb any judders. We also liked how the optional glass roof lets lots of light into the interior, making it feel even more spacious. Passengers in the middle row of seats also get more headroom than those in the standard Qashqai, which is something of a bonus, too. Road, wind and engine noise are also kept to a minimum, while the +2 generally feels calm and composed when driving on the motorway. That makes it ideal for long journeys – unless you need to carry seven passengers, because then you won’t be able to take their luggage!

Having a seven-seat interior layout, the +2 is much more flexible and versatile than any of its main compact crossover rivals – it certainly gets one over the likes of the Peugeot 3008, which only offers five seats. However, the third row of seats are very cramped and really only suitable for small children, and they leave virtually no space for any luggage – so you’ll be able to carry people to their destination, just not bring their gear. Fold down the third row of seats and you end up with 450 litres of boot space, which is actually 40 litres bigger than the standard Qashqai. And thanks to the versatile interior design, you can slide the middle row of seats further forward to add another 100 litres to the boot. Fold down that standard-fit split-fold middle row of seats and the boot expands to a reasonably impressive maximum capacity of 1,520 litres. Overall, the Qashqai+2 is really pretty versatile, but in basic terms rivals such as the Peugeot 3008 and Volkswagen Touran can take more luggage and are easier to load.

Nissan has a strong reputation

Nissan has a good reputation for reliability, which is reflected by its 12th position in the 2013 Driver Power customer satisfaction survey manufacturers rankings. That’s just above the middle of table, so there's no reason to think that the Qashqai+2 won’t live up to the same high standards as other Nissan models. The standard five-seater Qashqai itself placed 61st in the survey’s top 100 cars (it once finished in the top five), so the +2 should perform along similar lines. In terms of safety, the standard Qashqai was awarded the full five-star rating in the Euro NCAP crash safety tests, coming fitted with electronic traction control, six airbags, including front, passenger and side units, and active head restraints. LED daytime running lights can be added as an optional extra.

Given its high versatility, the Qashqai+2 is pretty good value compared to most of its rivals, with competitive list prices making it very appealing. You certainly get a decent amount of equipment and accessories for your initial outlay, the only downside being that the Qashqai and Qashqai+2 are both extremely popular in the UK, which means their resale values on the used car market are not as impressive as you might hope. It’s worth bearing in mind that not only are the diesel versions cheaper to run, but they also hold their value better on the second-hand market. 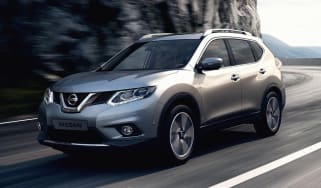 All the latest details on the new Nissan X-Trail, which goes on sale next month
Skip to ContentSkip to Footer