With a seats-up capacity of 565 litres and a seats-down figure of 1,996 litres, the Nissan X-Trail has a huge boot

The Nissan X-Trail is quite a bulky car, but the parking sensors that are standard and the bird’s eye-view camera system on the N-Connecta and Tekna help make light work of parking. Tekna cars also have intelligent parking assistance. The rear doors open unusually wide, which should be a boon for parents fitting child seats or people who might usually struggle to get into a car.

The seats are arranged theatre-style, so those sitting behind – small children, for example – are raised up and have a good view outside. Not surprisingly for such a big vehicle, boot space is generous, while Nissan’s ‘luggage board’ system (standard on all versions) promises nine different interior configurations for maximum flexibility. 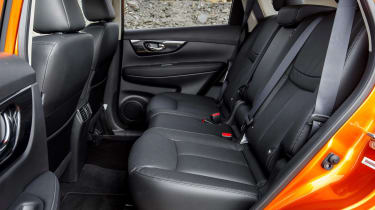 Interior space is where the Nissan X-Trail really has an edge over its SUV rivals – something active families and couples should appreciate. The X-Trail has the most legroom in its class, and while the seats are mounted progressively higher as you move down the car, this doesn’t come at the expense of headroom – even in models with the panoramic sunroof.

The middle row of seats slides to offer more legroom or luggage space as required. The optional third row of seats, which can fold down flat, is really only for children – adults will find it too cramped. There’s plenty of interior storage, including a lidded central cubbyhole between the two front seats, a good-sized glovebox and a couple of cup-holders. 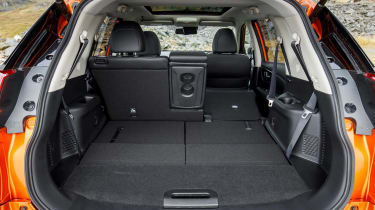 With a seats-up capacity of 565 litres and a seats-down figure of 1,996 litres, the X-Trail's boot is impressive, but can’t match the huge 720 litres of the Skoda Kodiaq. That space shrinks to 445 litres if you order the extra two seats, as they take up some space in the boot floor when folded. With them up, the X-Trail’s boot is large enough for a few shopping bags, though not seven people’s luggage. Unlike in some of its rivals, the X-Trail's four-wheel-drive system (where fitted) doesn’t reduce load capacity. And Nissan's 'luggage board', which enables nine different boot configurations by creating secret compartments and additional shelves, further boosts practicality.

The X-Trail's maximum braked towing capacity 1,500kg when fitted with the petrol engine, 2,000kg with with all manual diesels, or 1,500kg if you choose the automatic gearbox with the 1.7-litre diesel. The maximum unbraked trailer weight across the range in 750kg. However, given its performance when only lightly laden, the X-Trail may struggle when towing heavier loads.