"The Kangoo is a tough car that can cope with the rough and tumble of family life."

The Renault Kangoo is the epitome of a van-based people carrier, although the latest Kangoo van is actually based on the same mechanical parts as the Scenic MPV. For the people carrier version, the rear panels are replaced by windows, the load area is carpeted and a bench seat has been installed in the back. The result is a car that is versatile and durable, but can also be used to ferry large items when all of the seats are folded. Unlike some rivals which come with seven seats, the Kangoo is only offered with five seats, but the sliding side doors make access easy, and there's plenty of space in the back for three and their luggage. In an effort to distance the Kangoo from its van roots, Renault has given it a car-like specification, with air-conditioning, cruise control and electric heated door mirrors fitted as standard on all models.

Renault's tried and tested 1.5 dCi diesel is the pick of the Kangoo range, as it offers more pulling power than the 1.6-litre petrol and lower running costs, whether you go for the 75, 90 or 110 power outputs. Road Tax for all three is £110 per year.

It's tall, but the Kangoo doesn't lean very much in corners, and electronic stability control is standard on all models, so the Kangoo is quite relaxing to drive. The large glass area gives a clear view all around you, but parking sensors are a pricey option on all versions.

The Kangoo's suspension soaks up bumps, so it's well suited to urban life. However, in an effort to cut costs, Renault has skimped on sound deadening, so engine noise is transmitted into the cabin all too easily, and is especially bad with the noisy 1.5-litre diesel.

The Kangoo has lots of neat storage solutions inside. The rigid parcel shelf can be mounted to create a double-deck boot, while the rear bench folds flat into the floor to make a completely flat load area. There's fold-down tables set into the backs of the front seats, and Isofix child seat mountings are standard on all models. Fold the front passenger seat and there's a 2.5-metre long load area, while Dynamique TomTom models get roof bars as standard (they're a cost option on Expression models) and a variety of racks are available to attach to them. A handy wide-angle mirror to keep an eye on back-seat passengers is available as an option.

Electrical gremlins may be an issue

The Kangoo uses the same mechanical components as the Scenic MPV, but that car has a reputation for being relatively unreliable. Electrical gremlins are one bugbear, and because the Kangoo is built to a budget, these may well become an issue in the future.

There's plenty of space for your money

In terms of price, the Kangoo falls between the Clio supermini and Megane hatchback in Renault's range, but it has far more space than the latter. However, it's obvious where the savings have been made, because the interior plastics feel cheap. You do get a lot of standard kit for your money, especially on Dynamique TomTom models, which come with satellite navigation as standard. 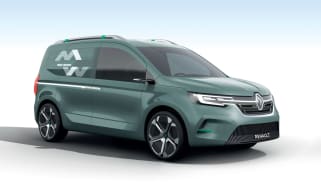 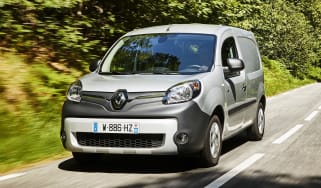 Costing from just over £14,000 after the plug-in van grant, the new Kangoo Z.E. can go further on a single charge than rivals
Skip to ContentSkip to Footer