Smooth and very responsive, the Audi A6 Allroad is the perfect motorway crusier

The Allroad is smooth and comfortable to drive, rather than particularly exciting. That’s not to say there isn’t enough performance – on the contrary, all the diesels have plenty of shove – but it feels like a calm cruiser rather than an out-and-out sports car. 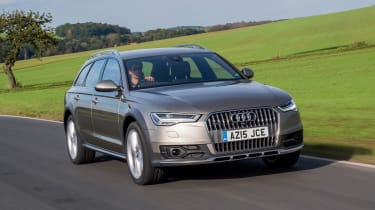 Despite weighing 70kg less than the previous model thanks to its aluminium bonnet, front wing, door parts and tailgate, the current Allroad still tips the scales at 1,855kg. The steering is weighty and there’s slightly more body lean than in the regular A6 Avant. Beyond that, the Allroad isn't massively different from the standard car, which is pleasingly precise and responsive to drive.

The seven-speed gearbox is smooth and there's plenty of grip thanks to standard 18-inch alloy wheels and quattro four-wheel drive. The biggest seller will be the 268bhp 3.0-litre diesel engine, which has plenty of power for overtaking and accelerating down motorway slip roads, going from 0-62mph in 6.2 seconds. The 3.0-litre BiTDI is a real monster, however, offering sports-car-like acceleration of 0-62mph in just 5.5 seconds.

The three diesel engines available for this car are all three-litre turbodiesels. Thanks to their high power outputs, they’re all more than capable of moving the A6 Allroad swiftly and overtaking safely.

When it comes to performance, the 316bhp BiTDI engine provides the most fun. Fitted with one of these, the A6 Allroad becomes a very fast car, with a top speed of 155mph and an impressive 0-62mph time of just 5.5 seconds. This is obviously less efficient than the regular TDIs, but for many drivers that added speed will be worth it.

We'd choose the 268bhp model, however. It's around £5,000 cheaper than the BiTDI but it'll still get you to 155mph, and 0-62mph takes just 6.2 seconds – plenty for the motorway and enough for overtaking. This configuration (with a seven-speed dual-clutch S tronic gearbox) is the perfect all-rounder and returns 50.4mpg fuel economy.