Most Audi A6s will be used as family transport and there should be plenty of space for everyone. The Audi’s boot is bigger than the BMW 5 Series’ and falls just short of the capacity offered by the Mercedes E-Class. And if the car is used for business trips, there’s plenty of space in the back for taller adults. All Audi A6s come with separate climate control zones for all four occupants, a feature that’s still rare in any class.

Front-seat passengers in the Audi A6 are unlikely to feel short-changed, as there's plenty of head and legroom. Large windows mean that the Audi feels airier inside than some of its rivals. There’s also plenty of leg and shoulder room in the back, despite the A6 being slightly shorter than the model it replaced, and even tall adults will have plenty of headroom. 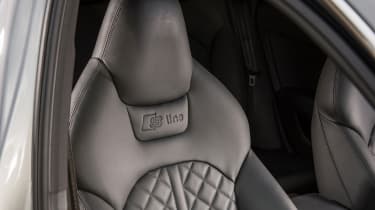 As many A6s are used as regular family transport, there are plenty of smaller cubbyholes dotted around the interior, including a lidded storage area between the two front seats, cup-holders, door bins and a decent-sized glovebox.

Boot space is good, too – the Audi’s 530-litre capacity matches the BMW 5 Series and is only slightly behind what you get in the Mercedes E-Class. Drop the rear seats down and boot space grows to 995 litres. The seats also split 60:40 (a cost option on the BMW and Mercedes) so you can carry longer items while also leaving room for two rear-seat passengers. 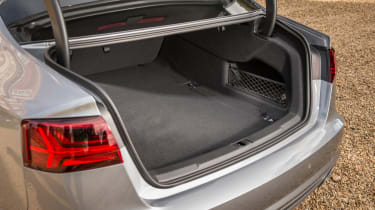 As with any saloon car, the Audi A6 suffers from a small boot opening and quite a high lip, but if you want a more practical luggage carrier, you’d be better off going for the Audi A6 Avant estate. It has a 565-litre boot that expands to a massive 1,680 litres with the rear seats folded down.