"The Audi A6 is a large executive saloon with an impressive interior and efficient engines. Several updates have kept it competitive, too"

Audi's large executive saloon bears a very close resemblance to its smaller Audi A4 and bigger Audi A8 brothers. It brings the brand's cool, crisp and understated look to battle against the BMW 5 Series and Mercedes E-Class in a three-way tussle that's been raging for decades, while also attracting buyers away from the Volvo S90 and Lexus GS.

While each of those cars has its virtues, they share the attributes of low running costs and a comfortable ride – factors that are appreciated by those who regularly travel long distances. The A6 line-up consists of the saloon, the A6 Avant estate and the powerful Audi RS6 Avant and Audi S6 models – both of which are performance models that we've reviewed separately. There's also the Audi A6 Allroad quattro, which serves as a tempting alternative to a medium-sized luxury SUV. 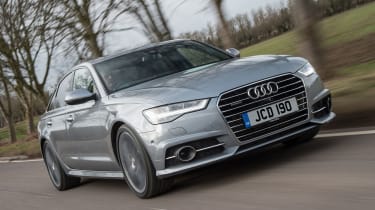 The bulk of the saloon range is powered by 2.0 and 3.0-litre diesel engines making between 188 and 316bhp. The least powerful 2.0-litre TDI Ultra combines 67.3mpg fuel economy (when the S tronic automatic gearbox is fitted) with a 0-62mph time of 8.2 seconds. CO2 emissions of 109g/km mean a reasonable 23% Benefit-in-Kind company-car tax rating. If you're more interested in power than economy, the 3.0-litre TDI can be chosen in 268bhp single-turbo or 316bhp BiTDI twin-turbo forms – the latter can blast to 62mph from rest in just five seconds at the expense of a 47.1mpg thirst for fuel.

In truth, none of the Audi A6 engines feels the least bit sluggish, but the petrol S6 takes performance several steps beyond the diesel models. Its 4.0-litre TFSI V8 churns out 444bhp and only returns 30mpg, but makes amends with a 4.4-second 0-62mph time and an aggressive roar from its exhaust when you make full use of its performance. The S6, along with the 3.0-litre diesels, uses Audi's quattro four-wheel-drive system, which can be added to 2.0-litre A6s as an option.

Every A6 feels most at home on motorways and fast A-roads; the car is better suited to wide, flowing turns than twisty back roads. In this regard, the Audi is shown up a little by the BMW 5 Series and Jaguar XF, both of which have more to offer the enthusiastic driver. However, the A6 is still capable of getting a move on when you want, with a 'drive select' control to adjust feel and response.

You may prefer to sit back and take it easy, though, because the A6 has always made a strong case for itself on the comfort and quality of its interior alone. There are SE Executive, S Line and Black Edition trim levels, all of which are very comprehensively equipped as standard, with sat nav, four-zone air-conditioning and heated leather seats, and can be further enhanced with options from an extensive list. S line and Black Edition add sporty styling inside and out, the latter having enormous 20-inch wheels and a look all of its own. 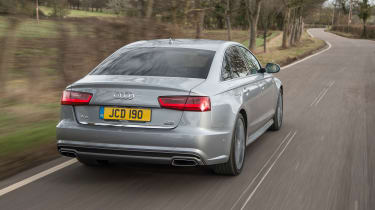 There's good news, too, in how the A6 rides. It formerly had a reputation for a rather firm, bumpy feel, but you can now choose the S line with comfort-orientated 'dynamic' suspension for no charge, which makes for a far smoother passenger experience. If you choose the adaptive suspension, the softest mode is particularly comfortable, while a stiffer mode can be selected for sharper reflexes on challenging roads.

Your A6 ownership experience ought to be satisfying. While the car only finished mid-table in our 2017 Driver Power ownership survey, drivers love its engines and comfort. However, good fuel economy has to be balanced against the fact that servicing costs are a little steep. The A6 also holds a five-star crash safety rating from Euro NCAP, although it's rather a shame that so much driver-assistance equipment – including autonomous emergency braking – should be reserved for the options list.