The Audi A8 boasts plenty of safety equipment and decent reliability

Audi has a good reputation for reliability and build quality, but that hasn’t stopped it yo-yoing up and down the results sheet in our Driver Power customer satisfaction survey in recent years. A 13th place finish in 2015 was reasonably impressive, but our 2016 poll saw Audi fall to 21st place out of 32 manufacturers, with a 23rd place finish for reliability. The Audi A8 itself sells in too few numbers to feature in the individual model chart. 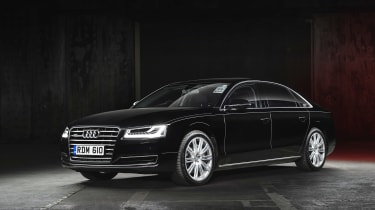 You get lots of safety equipment fitted to the A8 as standard, including six airbags, electronic stability control, an advanced anti-lock braking system, tyre-pressure monitoring and Audi's PreSense system, which closes the windows, activates the hazard warning lights and tenses the seatbelts if it detects a crash may be about to happen.

You can add even more safety systems from the options list, including a system that can brake the car for you and an impressive night-vision kit that can spot animals and people walking in the road when you’re driving at night.

One of the Audi A8’s most eye-catching features is the full-LED matrix headlights, which are optional on some models. These can project a bright white light for up to 250 metres without dazzling other motorists or cyclists, while an infrared camera cuts the high beam when it senses a vehicle coming in the opposite direction.

Because of its high price, the A8 doesn’t sell in huge numbers, which may explain why Euro NCAP has never crash-tested this model. It’s a shame that there’s no independent evaluation, but we’d expect the A8 to score very highly and achieve the full five stars if it was ever tested.