"The Audi A8 is the German manufacturer’s flagship model –&nbsp;a huge saloon car designed for comfort and luxury. In the right trim it can be fast and fun, too"

Not many people pop into their local dealership and drive out with an Audi A8 – and even fewer find one waiting at their front door every morning. This is a vehicle that blurs the lines between a saloon car and a limousine, especially in long-wheelbase form.

Designed to be as quiet, smooth and comfortable as possible, the A8 is a rival to the Mercedes S-Class, BMW 7 Series and Jaguar XJ, which are constantly trying to one-up each other with the latest and most advanced technology ever seen in cars, full stop.

There’s no such thing as a slow Audi A8, with even the entry-level 3.0-litre diesel boasting 258bhp and getting from 0-62mph in 5.9 seconds. With ample performance, this makes it hard to recommend the 4.2-litre V8 diesel, which only drops the 0-62mph figure to 4.7 seconds, but costs around £10,000 more and uses more fuel. Still, it looks sensible compared with the petrol S8 and S8 Plus models, with up to 597bhp for an otherworldly driving experience.

With the long-wheelbase A8 only, you can have the 6.3-litre W12 petrol engine more commonly found in the Bentley Continental, Bentley Flying Spur and Bentley Bentayga. If you need to know how much this will cost to run, it probably isn’t the car for you. At least under the latest tax system, every A8 will cost the same £450 a year to tax, as they all cost over £40,000, so are liable for a premium rate. For company-car drivers, the 3.0-litre diesel is the most affordable, with a 29% Benefit-in-Kind (BiK) rating. 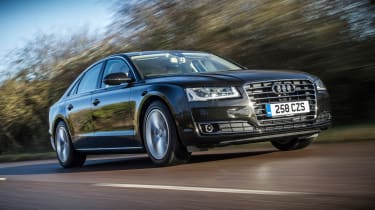 Every A8 comes with quattro four-wheel drive as standard, along with a system to change how the car feels, called Audi Drive Select. This includes adaptive air suspension, which allows the A8 to glide over bumps, or firm up to provide enthusiastic owners with better handling.

More reviews for A8 saloon

As you’d expect from a flagship Audi, the interior quality is almost unmatched and there are almost no cheap-looking plastics on display anywhere. Because of the A8’s design brief, the rear of the cabin is also far better appointed than in most cars, with features like reclining seats and individual climate controls. If there’s one slight issue, it’s that the A8 is starting to feel a bit dated, largely because models as big and expensive as this don’t tend to be replaced as often as something like the Audi A4, which sells in far greater numbers.

Trim levels include SE Executive, Sport and Black Edition, while the long-wheelbase, S8 and W12 models get their own sets of kit. With any A8, it’s probably easier to ask what isn’t included, because even the ‘standard’ SE Executive model costs over £60,000 and includes highlights like LED headlights, 22-way adjustable front seats, 18-inch alloy wheels, a seven-inch display for the driver, an eight-inch infotainment screen, DAB radio and cruise control.

Incredibly, there’s quite a lot of choice if you have near-enough six figures to spend on a luxury saloon car, with the Mercedes S-Class arguably even more comfortable, the BMW 7 Series better for the driver (if you’re the one driving), and the Jaguar XJ winning for character. The A8 is a consummate all-rounder, but is starting to show its age slightly.