“The Audi S8 offers supercar performance in a limousine environment. It’s a shame it doesn’t steer like a sports car, and it’s too big to be truly agile.”&nbsp; 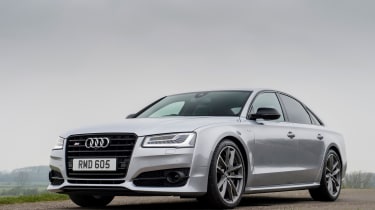 For those seeking ultimate performance yet a smooth ride, the Audi S8 is one of just a handful of options. It counts the Mercedes-AMG S63 and Jaguar XJR as it’s only real rivals.

Key to the Audi S8’s appeal is a 4.0-litre twin-turbocharged engine, which feeds power to all four wheels through an eight-speed automatic gearbox. It’s the engine that dominates the show, though. Despite the S8’s near-two-tonne weight, it can accelerate from 0-62mph in just 4.1 seconds and go on to a top speed of 155mph.

If that’s not enough, then you can choose the Audi S8 Plus, which boosts power from ‘just’ 513bhp to 597bhp. It’ll dispatch 0-62mph in 3.8 seconds and, if you choose the option to raise the top speed, it’ll hit 189mph. Those numbers are enough to put the S8 into Porsche territory.

Where the S8 can’t compete with a Porsche is when it comes to handling. Yes, there’s plenty of grip, but the steering lacks feedback, and the whole car is just too big to give genuine enjoyment on your favourite back-roads.

It may offer the muscle-car experience in a straight line, but inside the comfort and ambience is standard luxury-car fare. You’ll want for little when it comes to equipment, and a plush interior means you’ll arrive refreshed at your destination – if considerably poorer: the S8 will struggle to better 20mpg, and road tax is in the highest bracket.

Audi might have it that an S8 will cover 30.1mpg (or 28.2mpg if you choose the S8 Plus), but the reality is that the big V8 engine will consume a gallon of petrol every 20 miles or so, and considerably less if you unleash all of the S8’s performance. Road tax is close to the most expensive band, so it will set you back £295 a year – that’s despite the two-tonne S8 using clever technology to deactivate half the engine when it’s not needed.

Insurance is in the top group, although that’s typical of its rivals, too, as is the expense (and appetite) for new tyres, brakes and other consumables. At least a fixed-price servicing plan takes the heat out of routine maintenance. The S8, like other Audis, is sold with a three-year/60,000-mile warranty which is extendable for an extra fee.

The biggest cost, however, is depreciation – the value it loses over time. After three years and 36,000 miles, it’ll command just 30-35% of its original price if you sell it on. By comparison, the Mercedes-AMG S63 will retain around 45% of its value.

In many ways, the Audi S8 is like an old-school American muscle-car: big and ferociously fast in a straight line. That 4.0-litre V8 serves up more performance than you could reasonably use on the road. Despite its size, few cars this side of a Porsche 911 could keep up.

Standard cars can cover the 0-62mph dash in 4.1 seconds. Choose the S8 Plus and its 597bhp cuts that time to just 3.8 seconds. With the optional Dynamic Package fitted, top speed is 189mph.

It’s also quiet, thanks to a clever noise cancellation system, and the eight-speed automatic gearbox slides up and down the gears with all the smoothness you’d expect. While the light steering makes it easy to drive, it lacks the kind of feel and feedback most performance car drivers seek. And there’s no getting away from the fact it’s a very big, very heavy car, and this seems to put a strain on the brakes in extreme conditions.

Still, there’s enough grip to make the most of the car’s immense power whatever the weather. The adjustable suspension can be softened for a long-distance cruise or firmed up if you want things to get a little more sporty. It’s worth noting that the Mercedes-AMG S63 is more comfortable to ride in.

Like the exterior, the S8’s interior is solidly built with understated elegance; it’s also extremely comfortable. It bristles with expensive-feeling materials and is packed with technology, even if it feels a little old-fashioned compared to the remarkable interiors of cars such as the Mercedes S-Class and Bentley Continental Flying Spur.

Despite its status as Audi’s flagship saloon, it’s fitted with a lot of the tech available further down the range. That’s not necessarily a bad thing, as kit such as Audi’s MMI infotainment system and ‘Virtual Cockpit’ are the best in the business. The former has a control wheel to operate functions including audio and navigation – plus it offers an excellent handwriting recognition feature. The Virtual Cockpit serves up navigation, speed and telephone functions on a beautiful screen that replaces the car’s analogue dials.

Most of the car’s interior is cloaked in leather, and the seats are heated, move electrically and have a massage function, so there’s no chance of arriving with any aches.

Plenty of space for passengers, front and rear

Cars that are long and wide don’t necessarily offer a huge amount of space inside. The Audi S8 certainly does, however, with more than enough space for five adults. There’s oodles of room in the front for driver and passenger and three adults can sit abreast in the rear. That is, unless you choose the optional ‘rear seat package’ which delivers two individual reclining rear seats and footrests. It’s only available in the S8 Plus and costs more than £7,000.

Only the very tallest rear-seat passengers will struggle for room, so you’ll not miss the fact that unlike the standard A8, the S8 isn’t available in long-wheelbase form. There’s a decent amount of storage space too.

The S8 provides a 520-litre boot – bigger than those in the BMW 7-Series and Mercedes S-Class – and it’s accessible via an electrically-operated bootlid. The bootlid itself opens wide, making it easy to load bulky items.

The Audi S8 is a bit of a mixed bag here. While it certainly feels solidly built, Audi owners aren’t a particularly satisfied bunch. In our 2016 Driver Power owner satisfaction survey, no Audi finished higher than 31st place out of 150 cars. For the record, neither the S8 nor the A8 were featured as not enough data was collected.

Things are better when it comes to safety as the S8’s aluminium chassis is very strong. There’s a 360-degree parking camera, adaptive cruise control, plus driver, passenger and curtain airbags, ESC and three ISOFIX child-seat mounts. Options including a night-vision camera and radar-guided cruise control are also available.

Expensive to buy, but plenty of equipment

Putting the price tag of more than £82,000 to one side for a moment, the Audi S8 comes with a great deal of equipment fitted as standard. However, as is the way with Audi, there’s still plenty of kit available on the options list, so the prospect of a £100,000 S8 is a very real one – especially if you choose the £98,000 S8 Plus.

Choose the S8 Plus and you’ll also receive some body-styling tweaks, tinted glass, a power-close function for the doors, electrically-operated sunblinds, even more leather trim and 21-inch alloy wheels. Most Plus buyers will choose it for the extra slug of power it delivers; either way, it’s still a hefty premium to pay.

Sadly, and strangely, Audi Virtual Cockpit isn’t fitted as standard. This transforms the standard instrument dials into a configurable hi-res screen to display navigation and other functions. 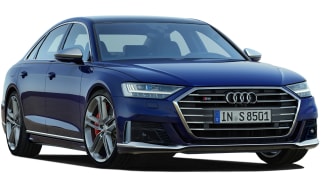