The Ford Focus hatchback has long offered the best driving experience in the family hatchback class, and the Focus Estate is no different. You don’t have to be a keen driving enthusiast to appreciate its responsive engines, direct steering and well judged suspension, while the latest version of the estate is also quieter and more comfortable than before, which will appeal to those who like to take things easy.

If you want a diesel engine, you have two main choices: the modern 1.5-litre TDCi and a powerful 2.0-litre TDCi, but the latter is only available in the expensive ST-Line, Titanium and Titanium X models. 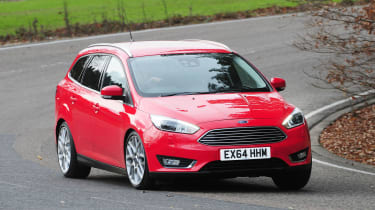 The 1.5-litre TDCi engine is available in three power outputs: 94, 104 and 118bhp. As there's no difference in fuel economy between them, we'd recommend the most powerful version, as it's a bit more flexible and effortless to drive. The 104bhp model is tuned for economy and feels no faster than the entry-level version despite its extra power.

Like the rest of the Ford range, the Focus Estate has benefited from the introduction of the company’s clever EcoBoost petrol engines. Although these engines seem very small, the addition of a turbocharger helps them to match the power and fuel economy of larger traditional engines.

The 123bhp 1.0-litre EcoBoost is particularly impressive, combining very nippy acceleration with 110g/km CO2 emissions. It’s also available in the good-value Zetec trim level, with a six-speed manual gearbox for quieter motorway cruising. More powerful petrol options include the 1.5-litre EcoBoost in either 148 or 180bhp form, which makes the Focus estate as fast as some sports cars, but like the fastest diesel, is only available in top-of-the-range trims.