There are two petrol engines and three diesel engines available for the B-Class, but we’d recommend the diesels unless you’re a low-mileage driver, as they offer a superior mix of performance and economy. Our favourites are the 107bhp B180 CDI and 134bhp B200 CDI – both of which are really smooth, responsive and efficient. 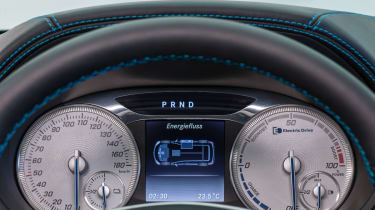 If you do less than around 12,000 miles per year and mostly make short trips around town, then you’re better off in a petrol, because without regular prolonged use, the particulate filter in a diesel car can get clogged up and they’re expensive to replace. If you fit this low-mileage driver profile, we’d recommend the 122bhp B180 SE – it’s more powerful and quieter than the diesels, but less efficient. The 156bhp B200 petrol is quick, but more expensive to buy.

The seven-speed gearbox is an expensive optional extra, but we’d recommend it because it’s superb and improves fuel efficiency. Higher-spec Sport models get stiffer suspension, bigger wheels and more responsive steering, but the trade-off is greatly reduced comfort, so we’d stick with a standard SE car unless sporty driving dynamics are really important to you.

The 174bhp B220 CDI diesel is quickest B-Class in the range, taking 8.3 seconds to get from 0-62mph. It’s also the only model available with Mercedes’ 4MATIC four-wheel drive system, which delivers useful extra grip in corners and when the weather’s bad but makes the car significantly less economical – for many buyers it won’t be worth the trade-off.

Like almost all electric cars, the B250e offers rapid acceleration around town. Its 179bhp makes for a very relaxing motorway cruise, too, and it rides and steers just as well as the conventionally powered models. There are three driving modes, called Economy, Economy Plus and Sport, which change the amount of power available for an improved range (claimed to be around 124 miles) or better performance as desired.