It's unlikely that Mercedes CLS buyers will be in the market for the ultimate in practicality, so it's no surprise that it's some way from being the most versatile saloon car on the market. It does, however, easily accommodate four adults despite the coupe roofline – something that in other cars can eat into space for rear passengers.

The CLS is a strict four-seater, although there's plenty of head and legroom for all occupants. The only downside is that the rear windows are quite small, which can make the rear of the car a bit dark and claustrophobic. The CLS has plenty of useful storage space though, including a deep, lidded box in the centre console. 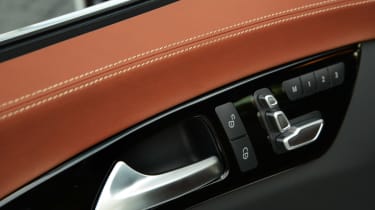 Opening the Mercedes' bootlid reveals a generous 520-litre luggage capacity, but you'll have to hit the expensive options list if you want folding rear seats. Rivals such as the Audi A7 have folding rear seats as standard. Buyers looking for a car similar to the CLS but with an extra dose of practicality should consider the A7, as it also has a hatchback-style bootlid that opens to reveal more luggage space.

Mercedes sells a tow bar for the estate version of the CLS (called the Shooting Brake), but not for the saloon.