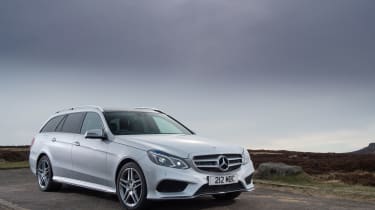 A sporty rear-wheel-drive chassis, suspension with self-levelling at the rear for good body control and accurate steering mean the Mercedes E-Class estate is an enjoyable and comfortable car to drive. It lacks the more engaging feel of the BMW 5 Series Touring, but for most drivers, most of the time, the E-Class will be the better all-rounder.

The diesel engines come with either four or six cylinders, the latter being far smoother and better suited to the car. The single petrol engine is quick off the mark, but its relatively high fuel consumption rules it out of the game.

Most E-Class estates will be bought by business users with one eye firmly on their company car tax, which is calculated on the car’s purchase price and CO2 emissions. For this reason, petrol-powered models from all manufacturers have fallen from favour – something that’s particularly true for Mercedes customers. 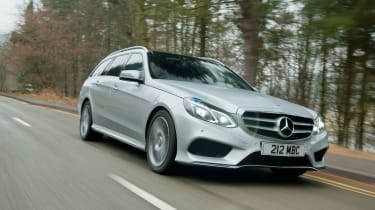 As a result, there’s only one petrol E-Class estate in the line-up. The E250 CGI is powered by a 2.0-litre engine that develops an impressive 208bhp. It can do 0-62mph in 7.8 seconds, but the diesel versions are more efficient and just as quick, while one of them is actually around £1,000 cheaper. For these reasons, we don’t recommend the petrol.

For its blend of fuel efficiency, power and refinement, the best diesel is the E350 BlueTEC. It’s a 3.0-litre V6 engine that develops 254bhp and takes the car from 0-62mph in just 6.6 seconds. What’s more, this is the only version of the E-Class estate with a nine-speed automatic transmission (the others are seven-speed) for a smoother and more efficient driving experience.

The E300 BlueTEC Hybrid develops 228bhp and takes 7.4 seconds to get to 62mph from rest, but it uses a four-cylinder, 2.1-litre engine, so it’s less refined. However, it can coast almost silently using its electric motor if there’s sufficient charge in the batteries. Those same batteries can provide a welcome power boost when overtaking, too.

The E220 BlueTEC and E250 CDI are also powered by a 2.1-litre engine. In the E220, it produces 175bhp and in the E250, just 26bhp more. As a result, the former is just one second slower from 0-62mph (8.8 seconds compared to 7.8). However, the E250’s engine produces a lot more pulling power at lower engine speeds, so it’s more relaxed and easily the better tow car. However, for everyday driving, where efficiency counts, we prefer the E220 BlueTEC.