"The MINI Clubman offers all the style and driving fun of the MINI hatchback, but in a more practical package."

The MINI Clubman is effectively the MINI estate and has been designed to be a little more practical than the three-door hatchback. The arrival of the new, larger five-door MINI hatch has weakened its case a little, but if three doors are all you need, then the Clubman may still be able to serve you well – and it certainly looks different to anything else on the road.

Fortunately, it's as fun as any MINI to drive and actually a little more comfortable, thanks to its slightly longer wheelbase. That extra length also means there's a reasonable amount of space in the back for two adults. With the back seats up, the Clubman's boot measures 260 litres – 100 litres more than the previous three-door hatch and 49 litres more than the recently extended three-door version. On the other hand, its boot is 18 litres smaller than that of the new five-door MINI hatchback. Folding down the Clubman's rear seats creates 930 litres of luggage space – not much less than the five-door.

Calling the Clubman a three-door may lead you to think it has a conventional hatchback tailgate, but in fact, the third door is a single small rear-hinged back door on the driver's side. You access the boot through a pair of side-hinged rear doors that open to reveal a usefully low load floor. Unfortunately, their frames reduce rear visibility when they're closed.

Like the hatch, there's a choice of basic One and sportier Cooper and Cooper S versions, culminating in the hard-charging Clubman John Cooper Works (JCW). Likewise, there's the usual pick of petrol and diesel engines, as well as automatic and manual transmissions.

The larger and more practical Countryman has stolen much of the Clubman's thunder, but the latter remains a quirky alternative with bags of charm that's somewhat closer to the spirit of the classic Mini.

Here's the good news – while the MINI Clubman is pretty expensive to buy, once you've got it on your driveway it's actually surprisingly cheap to run. All engines are pretty frugal, with the diesel Cooper D returning an excellent 68.9mpg and even the petrol Cooper managing a healthy 51.4mpg. 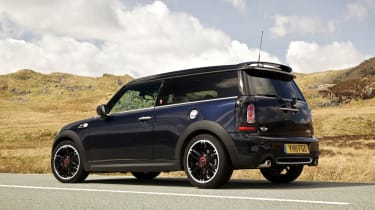 Adding MINI's good-value 'tlc' pack gives you five years' servicing for only £200. That all adds up to a premium car that costs very little to own. Obviously, the Cooper S and John Cooper Works models aren't quite as cheap to run, but they're certainly more fun to drive.

Clubman is fun to drive, with good engines

Bigger dimensions make the Clubman more comfortable than the smaller MINI hatchback. Unfortunately, they also make it feel less like an agile go-kart, but it does cope better with bumps and potholes. You still sit low in the car, but lots of adjustment in the steering wheel and driver's seat means it's easy to find an excellent driving position. 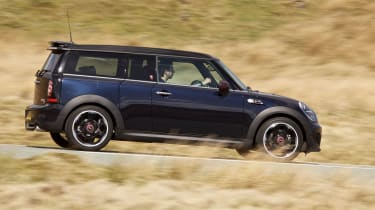 While the steering is less accurate than the hatchback's, only the 98bhp 1.6-litre One model feels underpowered, forcing you to change down the gears to accelerate fast when the car is fully loaded. The Cooper D is much better and more capable, and the performance-focused 208bhp John Cooper Works (JCW) model is both loud and very fast. For the best performance per pound, choose the One D, which has CO2 emissions of only 103g/km and returns decent fuel economy.

Spacious, but driver's-side rear door is a pain

The distinctive design of the Clubman creates extra space but also reduces comfort. The Clubman offers more rear legroom than the MINI hatchback, but the only rear door is on the driver's side. This means that in the UK, it opens out on to the road instead of the kerb – not the most child-friendly set-up. MINI's excuse is that it would have cost too much to switch the door to the other side on right-hand-drive cars. The door is rear-hinged, however, so getting into the back seats is very easy. 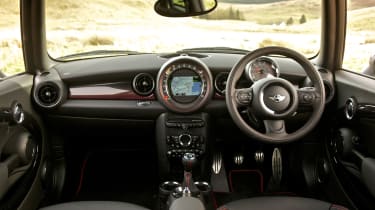 Once you're in the back, the Clubman doesn't feel as spacious as a VW Golf or equivalent. Door safety aside, there's just enough space to fit two child seats in the back, while most adults will be able to squeeze in comfortably for short trips. The ride is still a bit firm, but more comfortable than either the hatchback or convertible models.

Most family hatchbacks offer around 350 litres of storage space when the back seats are in place, but the Clubman only offers 260 litres. Although that's 100 litres more the MINI hatchback can hold, it's hardly spacious by class standards. If you put a child's pushchair in the back, there won't be much room for anything else in the boot. Fold the seats down and you get 930 litres – about the same as a Citroen DS3. 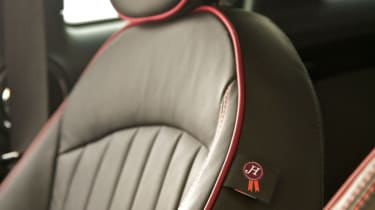 The barn-door style rear doors make loading easy, but also make it hard to see out the back when driving. Even though the Clubman's biggest improvement over the three-door hatchback model is that adults can actually sit in the back, the Clubman is not the most practical car available for the price.

Since its rebirth under BMW ownership in 2001, the MINI brand has established a strong reputation for great build quality. However, customers haven't been totally satisfied with the reliability of the car, and it falls behind some of its competitors in this area.

The Clubman has excellent safety credentials that should boost its appeal to family buyers – electronic stability control, ISOFIX child-seat mounts and six airbags are all standard. Although the Clubman itself hasn't been crash-tested by Euro NCAP, its sister cars in the MINI range have secured five-star ratings, scoring top marks for adult occupant protection.

You'll pay roughly £1,000 more for the Clubman than the standard MINI hatchback, but that's almost justified by the extra space you get for your money. It's still very expensive, however, and we just don't think it's worth it. On the plus side, the Clubman is likely to have strong resale value due to the popularity and prestige of the MINI brand. That means monthly lease payments will be low and buyers will get a good price when they go to sell their car. 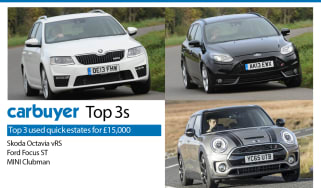