"The Nissan 370Z NISMO is about as hardcore as the sports coupe gets." 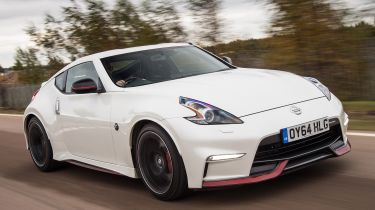 The Nissan 370Z NISMO is the most hardcore version of the V6-powered sports coupe. NISMO is the Japanese brand's tuning division and stands for Nissan Motorsport. NISMO models have always been the most raw versions of Nissan's sports cars, with the tuning arm turning their attention to anything from the GT-R supercar to the Juke crossover.

Upgrades over the standard 370Z are more focused on performance and aesthetics over luxury with the 370Z NISMO. A full racing bodykit is equipped, along with lightweight alloy wheels, a chunky spoiler and red detailing everywhere. Inside, the 370Z NISMO has Recaro-branded sports seats, a part leather and alcantara steering wheel and loads of red stitching.

The 370Z NISMO is powered by an upgraded version of the standard car's 3.7-litre V6 petrol engine. Power is uprated from 324bhp to 342bhp and sports suspension helps to keep the car rigid and level through the corners.

In terms of price, the 370Z NISMO's closest rival is probably the Audi TTS, but also sees competition from the Porsche Cayman GTS and the BMW M235i.

Considering it's pretty much a track day model of the sports coupe, the Nissan 370Z NISMO is incredibly well equipped. Along with the raft of performance upgrades, the NISMO still has sat nav, a reversing camera, automatic climate control and heated front seats.On paper, the 370Z NISMO's performance statistics look promising, with a 5.2-second 0-62mph time and a top speed of 155mph.There's no mistaking you when you're out on the road. Although some may not think this is a good thing, it's almost assured that the racing bodykit and massive rear spoiler will attract a lot of attention.

NISMO models are hardcore. That may be good on a track or even on a B road blast, but day-to-day, the 370Z NISMO will quickly become tiresome. The most irritating element is the stiff suspension - great for the car's handling qualities, but maybe not so good for your spine.Despite having a lot of power and decent performance data on paper, the car feels like it has to be worked hard to use all of it. The amount of power may be good, but cars like the BMW M235i and Audi TTS are much sharper to drive.The NISMO model is around £10,000 extra over the standard 370Z and the car isn't particularly cheap to run.