“The Nissan Micra is outclassed by most rivals, but its low price, spacious interior and easy driving experience still appeal.”

The Nissan Micra name has been on our roads for over three decades now, and in that time has built up a loyal following. Low running costs, predictable handling and impressive practicality for a car of its size mean it’s easy to see why the Micra remains a popular choice.

A lot can change in 30 years, however, and despite being in its fourth generation, the current Micra faces stiff competition that it can’t quite live up to. The Volkswagen Polo is far classier and feels better made, while the Ford Fiesta is infinitely better to drive. Relative newcomers like the Hyundai i20 and Kia Rio also offer buyers a better driving experience, as well as impressive warranties.

In such company the somewhat dowdy Micra feels a little outclassed, but it does have a trump card up its sleeve: it’s around £2,000 cheaper than most of its direct competitors. True, if you want modern conveniences such as air-conditioning, cruise control or even a split-folding rear seat, you have to spend more than that low base price, but nonetheless, many buyers will be attracted to how much the Micra offers for the money. 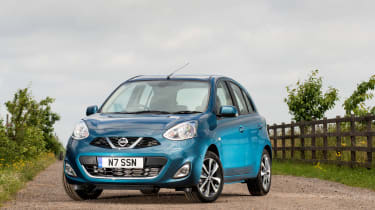 Nissan only offers a 1.2-litre petrol engine with the Micra, with either 78 or 97bhp. While the omission of a diesel may seem strange, the more powerful engine has a diesel-rivalling fuel economy of 68.9mpg and is road-tax-exempt thanks to its low CO2 emissions. In truth, the Micra is likely to be predominantly used for short journeys, or as a town car, so the lack of a diesel engine isn’t the handicap it initially appears to be.

Unless you’re really after an automatic Micra, we recommend the manual version, as the automatic CVT gearbox makes the car noisy and unpleasant to drive, and it’s also notably less efficient than the manual model.

On the road, the Micra has great visibility, light controls and a small turning circle, so it’s a remarkably easy car to drive in town. Outside of urban settings, things are less encouraging: the Micra becomes quite noisy on the open road, while its suspension causes it to bounce and jiggle too much on poor road surfaces. The Ford Fiesta offers a greater breadth of abilities and a far more enjoyable driving experience.

While the Nissan Micra looks somewhat dumpy and unprepossessing in the metal, the upside to that functional design is that it’s spacious and light inside, with plenty of head and legroom whether front and back. Unfortunately, that spaciousness doesn’t carry over into the boot, which isn’t as big as it should be. The omission of split-folding rear seats from the entry-level trim seems like excessive penny-pinching, too.

Micra customers can choose from six trim levels, starting with Visia and rising through Vibe, Acenta, Acenta Connect, N-Tec and the top-spec Tekna. While the Visia has front electric windows, Bluetooth connectivity and a USB port, we recommend the Acenta or Acenta Connect trims. Acenta adds electric door mirrors, driver's seat height adjustment, climate control, cruise control, alloy wheels and a roof spoiler, while the Micra Acenta Connect includes a touchscreen sat nav for about £500 more than the Acenta.

N-TEC and Tekna Micras are very well equipped cars. They both have rear parking sensors with a 'Parking Slot Measurement' system, climate control, automatic headlights and rain-sensing windscreen wipers, while the Tekna has suede trim and keyless start. All this pushes up the Micra’s price up, though, and a similarly priced (if less well equipped) Volkswagen Polo is likely to hold its value far better than a Micra with all the bells and whistles.

In terms of safety, the Nissan Micra scored four out of five stars in its Euro NCAP crash-tests. While this is by no means a bad result, many other cars in this class managed the full five stars. The Micra’s standard electronic stability control, anti-lock brakes, six airbags and ISOFIX child-seat anchor points should provide reassurance, though. Nissan’s rock-solid reputation for reliability has taken a tumble over recent years, as its 28th place finish out of 32 manufacturers in our most recent Driver Power customer satisfaction survey attests.