"The Nissan Note Tekna has a load of standard equipment on board, plus a useful sliding rear bench." 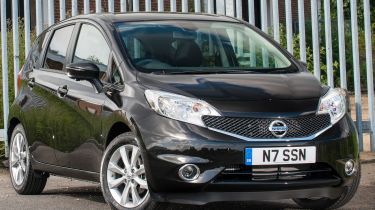 The Nissan Note Tekna is a tall hatchback that comes with loads of standard equipment. As it technically sits at the top of the range, only outclassed by the Tekna Style (with its more pronounced bodykit), the Tekna is fitted with automatic climate control, keyless start (through Nissan's iKey system), a 360-degree camera system, Nissan's Safety Shield tech (which includes blind spot detection and a lane departure warning system) and part-leather seats. That's on top of satellite navigation, automatic wipers and headlights.

The Tekna is available with either a 1.2-litre supercharged DIG-S petrol engine or a 1.5-litre diesel engine. The diesel engine has a claimed fuel economy figure of up to 81mpg and is connected to a six-speed manual gearbox. This engine and the manual gearbox version of the 1.2-litre petrol are both free to tax, so running costs should remain low. The petrol can be had with a CVT automatic gearbox, but we'd avoid it unless it's absolutely necessary; it's slower, noisier and less economical than the manual version.

The Tekna is treated to a sliding rear seat bench which can improve either rear passenger space or total boot space. The Tekna's Safety Shield kit will also help to keep you on the road and out of trouble.

In Tekna trim, the Nissan Note looks like better value than some of its more conventional hatchback rivals. You get a good level of standard equipment, while interior and boot space is bigger than a Ford Fiesta.As long as you avoid the CVT automatic, the Note's engine range is pretty efficient. Even the petrol engine is capable of around 66mpg, which is more economical than the most fuel-efficient engine in the Kia Venga and performs around the same as a 1.0-litre EcoBoost-equipped Ford Fiesta.The Note is a very easy car to drive. With light steering and comfortable suspension, it'll appeal to those who want a car that's easy to live with.

A few interior plastics feel a little cheap and some buttons are a little awkwardly placed, so you may have to stretch to reach them.The Note may not have the same amount of desirability compared to the fun factor of a Ford Fiesta or the quality of a Volkswagen Polo. The diesel engine may be economical, but it's very noisy. It's particularly noisy when accelerating, with a louder-than-average din reaching the interior.

The 1.5-litre diesel engine's impressive fuel economy means its our pick of the range. It's tax-free and provides decent performance too. Go for the 1.2-litre petrol engine if you only plan on driving it in town or don't do that many miles per year.