The Megane Sport Tourer name is a bit a misleading, as the standard Renault Megane estate is actually more of a comfortable cruiser than a peppy performance model. The sportier GT Line version has firmer suspension, so the ride quality isn’t quite as good. For speed and handling, the GT 220 gives you a more powerful engine and uprated brakes, as well as Renaultsport-influenced aesthetic tweaks.

At high speed, the Megane isn't as controlled as many of its rivals, and winding, bumpy roads will prove particularly taxing. It does have light steering and a smooth-shifting manual gearbox, though.

There are four different petrol engines available for the Megane Sport Tourer, starting with the 1.2-litre 113bhp TCe, which is economical but not particularly fast, as it takes 11 seconds to reach 62mph from rest. It’s not bad at low speed around town, though.

There’s also a 128bhp version of the same engine available only with an automatic gearbox, which drops the fuel economy but is a lot more capable and quicker, with 0-62mph taking 10 seconds and better pulling power on offer. 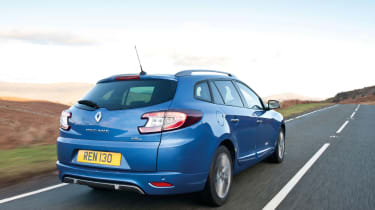 Finally, you have the performance-focused 2.0-litre GT 220, which is seriously quick for an estate, with 218bhp on tap and 0-62mph taking 7.6 seconds.

You get a choice of two diesel engines with the Megane Sport Tourer, both of which are very economical. The smaller 1.5-litre dCi has 108bhp and is the most frugal of the pair, but it’s quite slow and takes 12.1 seconds to reach 62mph from a standstill. Again, the fuel economy figures are impressive, but if you load it with people and luggage – which is what estates are for, after all – it really isn’t powerful enough.

The 128bhp 1.6-litre diesel is a much stronger and more flexible engine, with a lot more pulling power and a 0-62mph time of 10.1 seconds, so it’s great for the motorway and longer journeys, plus it has no trouble hauling people or gear around. We think it’s the best all-rounder in the range.