"The Renault Megane Sport Tourer isn't overly sporty. This is an estate that prioritises practicality and comfort."

Despite the launch of an all-new Renault Megane, the Coupe and this Sport Tourer version (which are both based on the previous Megane) remain on sale alongside the new car, each achieving specific aims that the new model can’t yet provide.

The Renault Megane Sport Tourer is an affordable, practical family estate car. Despite the ‘Sport’ in the title, only the GT 220 can truly claim sportiness as an attribute. All versions have light yet accurate steering, so it drives nicely enough, but a smooth ride on rough roads makes comfort this car’s real trump card – entertaining the driver really isn’t a priority.

Instead, the Sport Tourer delivers an easy, fuss-free driving experience. All versions are attractive to look at and there’s no denying the extra usefulness of an estate over a regular hatchback. In fact, the Sport Tourer easily rivals the likes of the Kia Cee'd SW and Ford Focus Estate for luggage room.

Economy is a Megane Sport Tourer strong point: the most frugal 1.5-litre dCi 110 version is capable of 78.5 mpg and is exempt from road tax thanks to its low emissions. It might be a little slow for some, though, and the alternative 1.6-litre diesel engine has plenty of pulling power, is strong on the motorway (even with a boot full of luggage) and is almost as cheap to run as the 1.5-litre. 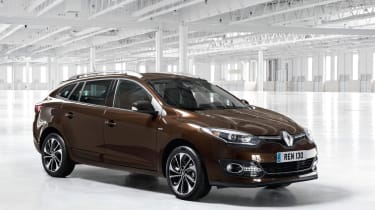 Some of the petrol engines are fairly economical, too, and they make more sense if your annual mileage is relatively low or if you tend to stick to town driving – the 1.5-litre TCe 115 manages 53.3mpg. Finally, more performance is provided by the fast and powerful GT 220. It’ll do 0-62mph in 7.6 seconds, with the trade-off being reduced fuel economy.

The Megane Sport Tourer comes in five specifications. The entry-level Expression+ is fairly well equipped with air-conditioning and a Bluetooth phone connection. The Dynamique Nav comes next, adding TomTom Live navigation as well as automatic headlights and windscreen wipers and cruise control. The Limited Nav places the emphasis on luxury, with a panoramic sunroof and dark tinted glass for the rear and tailgate, as well as some stylish trim upgrades.

Near the top of the range is the GT Line Nav, which looks smart and is a bit more fun to drive thanks to its firmer suspension, but note that this somewhat spoils comfort. The most expensive GT 220 is only available with a 218bhp Renaultsport engine and various upgraded components and is treated as a separate model in its own right.

The Megane Sport Touring isn’t separately listed in our annual Driver Power owner satisfaction survey, being included within the Megane hatchback’s results. That car came in 62nd place overall out of 150 cars in 2016, a 32-place improvement over the year before. Ride quality was praised by owners, as were its low running costs. However, build quality, seat comfort and performance weren’t as highly rated.

This Megane also holds a four-star Euro NCAP crash safety rating, with good showings for both adult and child occupant protection. It lost out on a fifth star due to a comparative shortage of systems to prevent a crash from occurring in the first place.