The Renault Scenic promises to be both reliable and safe

The Scenic managed a very strong result in the most recent edition of our Driver Power customer satisfaction survey, so it seems owners have very few complaints. The larger Renault Grand Scenic scored five stars when it was crash-tested by Euro NCAP in 2012, and although the criteria have become even more stringent since then, it should still be very safe.

Despite being a six-year-old model, the Scenic continues to do well in our Driver Power surveys. 2016 saw it finish in 19th place out of 150 cars, making it the highest-rated MPV on our list. Scenic owners praise their cars’ running costs, reliability, comfort and practicality, with a 77th-place result for performance being the only blot on the Scenic’s copybook. Renault as a brand also did well, coming eighth out of 32 carmakers. 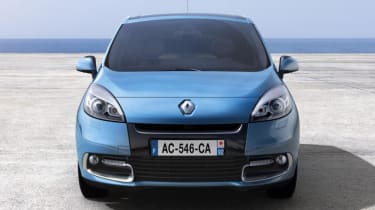 Although the current version of the five-seater Renault Scenic hasn’t been tested for crash safety by Euro NCAP, the seven-seater car, with which it shares many parts, was awarded five stars. The car scored 91% for adult protection, thanks to a passenger compartment that remained stable after a front impact, while it was also rated at 76% for child occupant protection. The Renault lost some points in the latter category for not having a clear display that warns you when the passenger airbag has been turned off.

All Scenics come with a vast array of safety features such as child safety locks on the rear doors, automatic headlights and wipers, two-stage front airbags, electronic stability control and anti-lock brakes. You can make the Scenic even safer by choosing the £485 Safety Pack (standard with the Limited Nav model), which adds rear parking sensors and power-adjustable heated door mirrors. However, the latest hi-tech safety features available on some rivals – such as active cruise control – aren’t available on the Renault Scenic.