The Subaru Impreza’s 380-litre boot is on a par with the Volkswagen Golf, but the floor isn’t flat, making it harder to load luggage 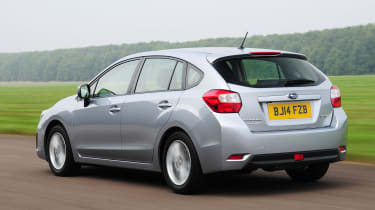 The Subaru Impreza, like many cars in this class, offers enough space inside for four adults, as well as decent boot space and a smattering of cubbyholes dotted about the cabin.

Inside the Impreza, you’ll find a decent amount of storage, including a hole underneath the air-con controls for phones and wallets, as well as a decent lidded cubby between the front seats. The cupholder on the centre console is pretty crude. Subaru seems to think one size fits all, whereas many rival models have a system that grips to accommodate different-diameter bottles.

In terms of outright passenger space, the Subaru Impreza is on a par with its rivals, with enough space inside for four normal-sized adults. The doors are light and open wide, and the back seat is fairly accommodating. That said, the middle seat is a little narrow and we wouldn’t want to perch there for too long – especially as the transmission tunnel eats into legroom in order to accommodate the standard four-wheel-drive system.

Visibility is acceptable, and all cars come with a reversing camera as standard. Strangely though, parking sensors are absent – meaning you’ll still need to be careful when backing into a tight space. 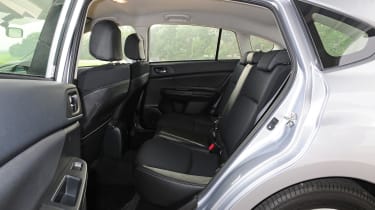 While the 380-litre boot may be up there with the class leaders (the total volume is identical to the Volkswagen Golf), the space is poorly finished. There’s a carpet centre section, but hard plastics have been used on either side, which will scuff and scrape if you frequently carry large or heavy objects with sharp edges. What’s more, the wheelarches and other mechanical components means there are plenty of obstacles to negotiate when loading large objects. The seats do split 60:40 and fold down, but if you want a big boot for carrying all the family’s paraphernalia, you’d be better off looking at the Skoda Octavia.

Perhaps surprisingly, the Subaru Impreza is actually a reasonably accomplished tow car. Of course, the lack of a diesel engine means it lags some way behind cars like the Nissan Qashqai and Toyota RAV4, but it beats the Ford Focus and some Volkswagen Golf models.

However, while you can technically tow a 1,500kg braked trailer, you wouldn’t necessarily want to. The breathless 1.6-litre engine struggles with just two people on board, let alone pulling a caravan and all the associated kit. And automatic Lineartronic models can only pull a 1,200kg braked trailer.