Underpowered petrol engines means that diesel is best for the Vauxhall Astra, but refinement is good

Once again, it only takes a short stint behind the wheel of the Vauxhall Astra to realise it’s an older design than many of its rivals. Even so, the Vauxhall can still match the class leaders for refinement and comfort, while the handling makes the car feel settled at speed and the light controls make it easy to drive.

Unfortunately, the calm and quiet of the Astra’s interior is undermined by the creaky old 1.3-litre and 1.7-litre diesel engines, which clatter noisily at idle and become intrusively loud on the move. As you’d expect, the smaller engine feels extremely sluggish, needing 13.8 seconds to go from 0-62mph. The 1.7-litre is faster, but only just, with a 0-62mph time of 11.6 seconds.

If you want more performance, then the 192bhp BiTurbo 2.0-litre diesel engine is hard to beat, going from 0-62mph in 8.1 seconds and on to a 140mph top speed. Curiously, because it delivers its power very smoothly, it never feels as fast as the figures suggest. 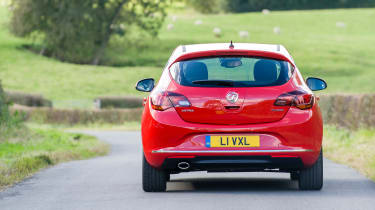 Once again, it’s the 1.6-litre diesel that proves to be the best choice overall. It’s not as fast as the 2.0-litre engines, but even with just 108bhp, it never feels underpowered. And because it’s smooth and quiet compared to the other diesels, your ears don’t take a bashing every time you use its full performance.

Of the petrol engines, the 1.4 and 1.6-litres are best avoided, as they sound strained under hard acceleration yet need to be worked hard to keep up with the flow of traffic. The turbocharged versions of these engines perform much better and are more refined, too. However, like the BiTurbo diesel, the 178bhp 1.6-litre turbo doesn’t feel as fast as its 7.9-second 0-62mph time suggests.

At the top of the performance tree is the blisteringly fast 276bhp VXR, which will blast from 0-62mph in 5.9 seconds and is capable of 155mph. It has sports suspension, steering and brakes, and is very fast through corners. It’s not quite as much fun as a Ford Focus ST, but it generates a staggering amount of grip and is very composed.

Sadly, this entertaining driving experience doesn’t filter down to other models in the range. The standard Astra has safe and predictable handling, but it’s not as enjoyable as a Ford Focus or SEAT Leon. Not only does the car suffer from light and lifeless steering, it runs out of grip sooner than rivals and the gearshift doesn’t feel as nice to use, either.

Still, there are few complaints about the car’s refinement. Wind noise is kept to a minimum and few cars in the class ride as quietly as the Astra. Go for the optional FlexRide adjustable suspension, which is available on Tech Line GT models and above, and you also benefit from a supple ride – although you’d struggle to call the standard car uncomfortable.